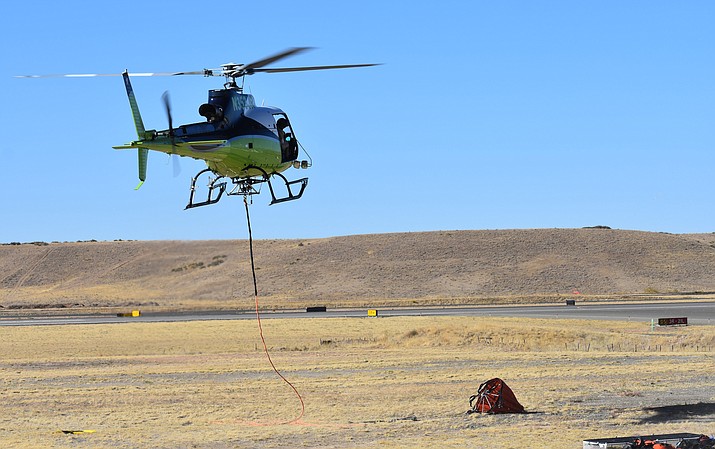 A helicopter prepares to take off with a water bucket at the Prescott Airport on Saturday, Oct. 17, 2020, as part of the air attack on the Horse Fire near Crown King. (Richard Haddad/Courier)

The Horse Fire grew to nearly 8,500 acres as of Saturday, Oct. 17, burning near Crown King and Towers Mountain, according to the Prescott National Forest, quadrupling in size.

The wildland fire is seven miles northwest of Crown King; 18 miles south of Prescott on the Bradshaw Ranger District, burning through juniper, chaparral and timber. It has claimed 8,458 acres since it started Thursday, and remains zero-percent contained.

The cause is under investigation, a Saturday news release states.

Airtankers and helicopters continue working on efforts to slow the spread of the Horse Fire, and firefighters are working on structure protection in and around the community of Crown King and Towers Mountain. The fire is in a remote section of the forest with steep, rugged terrain.

Efforts on Friday were focused on the protection of the communities, and infrastructure that are being affected by the Horse Fire. Extreme fire behavior was observed over the fire making uphill runs throughout the day, according to the news release.

All roads leading into Crown King have been closed including Jefferson Street at Goodwin, Senator Highway at Palace Station, County Road 59 from Cleator, and Wagoner at Hozoni. The Forest Service asks the public to avoid the area to allow resources to travel safely to and throughout the incident area.

A Forest Closure Order is in effect for the trails and roads in and around the Horse Fire area as well.

The Yavapai County Sheriff’s Office has issued a Code Red “Go.” There are evacuations currently in effect for the communities of Crown King, Minnehaha, Horsethief cabins, and any private inholdings in and around the fire area.

For information on the Code Red alerts issued, visit the Sheriff’s Office Facebook page for updates or call 928-771-3321, or to sign up for Code Red notifications visit https://www.ycsoaz.gov/community/Emergency-Preparedness/Emergency-Notification-System.

The American Red Cross and Community Health are hosting the Evacuation Center set up at Mayer High School which is located at 17300 E. Mule Deer Drive, Spring Valley.