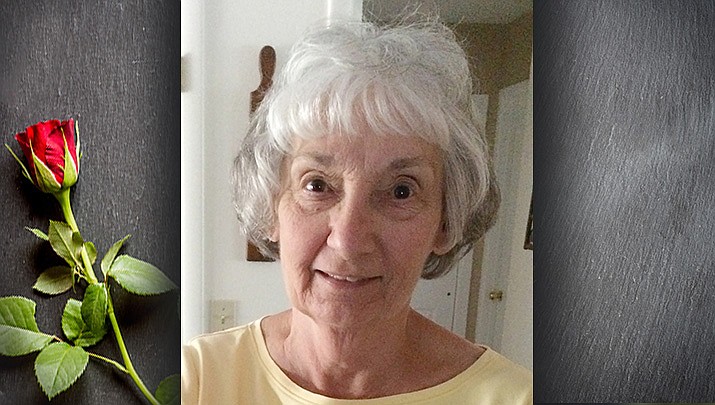 Gail Absher passed away peacefully on Oct. 9, 2020, surrounded by family and caregivers at the Pleasant Valley Care Home in Prescott, Arizona. Born in Council Bluffs, Iowa, in 1935, Gail Nelsen lived in Milwaukee before moving to Phoenix with her mother and step-father.

She attended North High School in Phoenix and remained in contact with her school girlfriends throughout her life, treasuring their friendships and their occasional lunch dates to recall memories of their good times and high school antics.

Introduced by one of her high-spirited high school friends, Gail met her husband, Lew, in Phoenix. They were married for more than 60 years, until his passing on June 1. Gail worked a number of part-time jobs over the years, but dedicated her life to raising her three children — Randy, Gordon and Amy. She belied the image of a stay-at-home Mom, rarely passing on an opportunity to get involved, volunteering at church, at school, or at whatever activity was currently piquing one of her children’s interests. She served as Homeroom Mother, Camp Fire Girl Leader, Church Youth Group Chaperone, and anywhere else that needed a helping hand.

Gail was also an accomplished seamstress, creating everything from tablecloths, bedspreads and curtains, most of her daughter’s elementary school wardrobe, Aloha shirts for her boys, and even two prom dresses for her daughter.

Once her children were grown, Gail’s love for children (and her patient anticipation for grandchildren) led her to become certified as a classroom aide for the Head Start Program, where she could encourage young people to pursue the benefits of learning.

She hated to fly, but wouldn’t hesitate to climb aboard and strap in for a flight to visit her kids. These adventures took her to New York, New Hampshire, Washington, D.C., Mexico City, and even a solo trip to Japan.

Retiring after decades in Phoenix, the couple bought a summer home in Prescott and promptly fell in love with the cooler temperatures and four seasons of the mountains. They relocated to Prescott in 2001. Gail continued her ways and immediately signed up to serve as a weekly volunteer at Yavapai Regional Medical Center, resigning only when her legs would no longer dependably carry her on her rounds.

She will be remembered for her sweet, gentle disposition, strength of character, and great sense of humor. With Lew, Gail was a great friend and neighbor everywhere they lived, from North High, to Fleetwood Lane, St. Louis the King, 65th Avenue, and Wildwood. She regretted losing touch as her ability to correspond declined. She also treasured a great many furry, four-legged friends who never failed to deliver a smile to her face and heart.

Gail is survived by her children, Randy and Carolyn (Trosky) of Portsmouth, New Hampshire, Gordon and Kristine (Johnson) of Las Vegas, Nevada, and Amy and Adam Young and granddaughter Annabel Young of Prescott.

Due to COVID restrictions, no immediate services are planned. Both Gail and Lew’s ashes will be interred at the Prescott Veterans Cemetery on Friday, Dec. 11, 2020. In lieu of flowers, the family asks that you consider a donation to the Yavapai CASA for Kids Foundation or the Yavapai Humane Society.