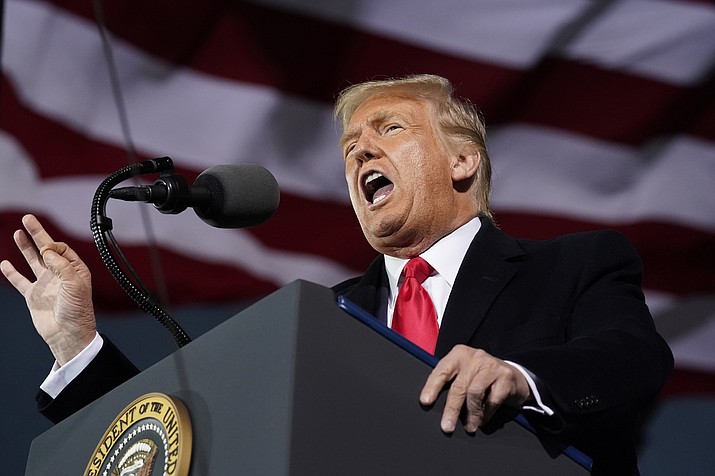 The City of Prescott has entered a contract with President Donald Trump’s re-election campaign that has set up the groundwork for a Trump campaign rally at the Prescott Airport at noon Monday, Oct. 19.

Prescott Community Outreach Manager John Heiney reported Thursday, Oct. 15, that Prescott Airport staff was contacted on Tuesday and the city executed the contract with the campaign on Wednesday.

Still to come are many of the details about traffic, security, and transportation of the president and his staff.

Initially, Heiney said city officials were told “that the campaign was looking to do a stop on Monday. Since then, the city has executed a contract with the campaign.”

Prescott Airport staff will also be meeting on Friday to discuss public safety issues, including traffic and parking.

As of Thursday evening, the campaign had posted a “Get Tickets” feature for the event on the www.DonaldJTrump.com website. The site says, “You may only register for up to two tickets per mobile number per event. All tickets are subject to first come first serve basis.”

The event is scheduled for noon, but the doors are set to open at 9 a.m., according to the website.

Heiney said the city expected to have more information to release to the public on Friday. “We’re trying to work out the security details,” he said.

He stressed that while the city was leasing its property at airport for the event, “Everything else is being handled by the campaign.”

Added Heiney: “We’re waiting on more details, and there has to be a lot more coordination. We are going to know more in the next 24 to 48 hours.”

Prescott Mayor Greg Mengarelli said Thursday evening that he was “thrilled and honored” to hear that the president would be conducting a rally in Prescott.

Mengarelli added that he has full confidence in Prescott city staff to ensure that the Monday rally will be a safe and successful event.