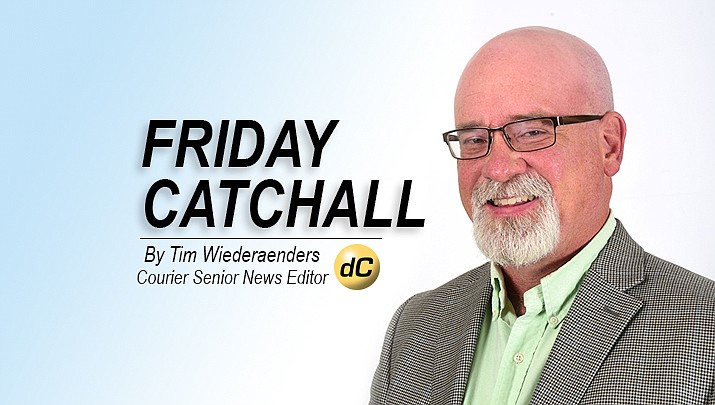 • WHY – The Prescott area and its residents were painted poorly with a pretty broad brush earlier this week — that we’re racist. It was a report and a column in a Phoenix newspaper following Black Lives Matter protests on the courthouse plaza at which people showed up with guns.

First and foremost, no one except the Courier has asked these gun-toting “counter protesters” … why?

They told us on the record and off: “We’re just here to make sure there is no violence,” noting protesters are unlikely to become unruly when they witness “armed patriots” defending their community.

They did this because they witnessed on TV protests turn into riots and looting, and did not want it to happen here.

But other media and the public assume, “Guns, protest, racist.”

Let’s get some things straight. It is legal to open carry in the state of Arizona. It also is legal to speak your mind. Both sides and the media need to stop with the assumptions and blanket statements.

It reminds me of when I was a newspaper editor in Kingman, where Timothy McVeigh practiced in 1995 with Army buddies for when he blew up the federal building in Oklahoma City, killing 168 people. ABC News and the now-late-Peter Jennings came to town a couple weeks later. Their report labeled Kingman as a militia hotbed, teeming with anti-government types.

Not true. I lost respect for Jennings that day, and learned how national media — even big city newspapers — can get it very wrong.

A couple quotes (even 50 interviews for this past week’s Phoenix article) are not an accurate representation of a community with 50,000 residents or a region of 180,000.

By the way, something else many of those “counter-protesters” told the Courier: they came to town for the day, from … Tucson, Phoenix, etc. So perhaps the guys who were toe-to-toe with BLM protesters and some of the guys flying militia flags — don’t live even here? Are they a small vocal minority?

See where assumptions get you?!

As for the horrible language, insults, hatred and anger expressed by some of the armed individuals toward protesters, no — that’s not OK either. That is as reprehensible as BLM looting.

Add in that I have lived here for going on 25 years, and I can say with certainty the vast majority of Prescott-area residents are good, respectful, fair and … non-racist people.

Learn to ask more before you jump.

• WHOSE PAYROLL? – This week I watched the Prescott City Council meeting in awe — call it disgust. From it I learned a council member, Cathey Rusing, had accused city staff of being on developers’ payroll.

We hear it often, actually, to quote Rusing’s email: “Whose payroll are you on?”

Others quip: “They’re on the dole,” or “You/they must be in their back pocket.”

These are statements of disbelief, even frustration, that what you’re seeing/reading/hearing is so unbelievable someone must be profiting from it or bending the rules.

In this case, City Attorney Jon Paladini objected to Rusing’s accusations, to which she said, “You weren’t even here then.” But still she tossed out the label across the city, accusing bias toward developers, hinting unethical practices.

Rusing may have been elected by a huge majority of voters, but when staff — including other council members and the city manager — are just doing their jobs, following the rules, even being ethical and fair, it is inexcusable.

Just because you don’t like something does not mean those involved are crooked. This ranks up there with Prescott being called “racist.” Assumptions and blanket labels get us nowhere.

I would add that it also insulted the developer, Ron James, whose family has “done nothing but help the city” and other entities here for more than 35 years – to the tune of more than $20 million.

For the Deep Well Ranch development, he’s been working on it with the city for more than a decade; plus, his water is tied to a 50-year-old city agreement.

Think: fairness and timeliness is what he wants.

On the flip side, it did appear to be an ambush; Paladini and others were ready for Rusing.

All told, many bridges were burned this week. I hope all involved will work to rebuild them.

• THANK YOU to our readers for helping us reach new milestones. The Daily Courier’s subscription-based website, dCourier.com, is now averaging 2.5 million page views each month! That’s per month, not per year. And, some months exceed 3 million. We’ll hit 26 million or more for the year.

Then there are the individuals (unique visitors), numbering more than 300,000 per month.

It is a testament — call it a clear signal — to how you value what we do. Thank you for reading us.