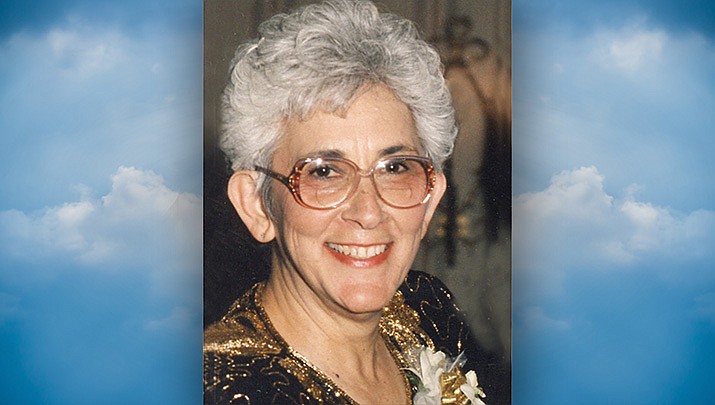 Glady Echeverria Miller passed away peacefully on Wednesday, Oct. 7, 2020, surrounded by her loving family. An Arizona native and the 11th of 12 children to Basque immigrants, she was born March 28, 1937, on her family’s Cross Mountain Sheep Company ranch, and raised in Wickenburg.

A bright and resolute student, she exhibited at an early age her determined pursuit for knowledge and leadership, eventually earning the honor of valedictorian of her Wickenburg High School class. A lifelong learner, Glady also attended Arizona State University and Phoenix College.

In 1955, she married Lloyd Miller, also of Wickenburg, whose career took them and a growing family to several locations in California. Eventually, a large and loving extended family and deep roots landed them back in Arizona for good. After many years in Phoenix, Glady and Lloyd made another home in Prescott in 1990.

Glady is survived by her husband of 65 years, Lloyd; and her six children, Ashley, Anthony, Annette, Andrew, Angela, Amy; and brothers, Julio, Rudy, and Donald Echeverria. Also a grandmother to 23 grandchildren, 14 great-grandchildren, one great-great-grandchild, Glady was devoted to her family. Always at the center of organizing family events, reunions, and celebrations, Glady was a loving matriarch and will be missed greatly by all her family, to whom she has left a treasure of love, wisdom, and happy memories.

Her entire life, she was a force behind efforts to create a legacy of honor, celebration and pride for her family Basque heritage. Uniting her brothers, sisters, and countless other family members to gather and remember their shared history. Glady had a lifelong commitment to advancing social causes in her community and throughout the state. Her volunteer and professional career led her to establish and serve many organizations that have had a positive impact on youth and social justice advocacy.

For over 20 years, Glady was a leader in the adoption of mediation as a substitute for a legal dispute in the courts. She co-founded The Mediation Center of Yavapai County and expanded mediation techniques to the state and nationwide courts. She dedicated countless hours to helping people resolve their disputes and understand each other better. Among her earliest passions was serving the homeless and youth, Glady co-founded and was the director of Newman Center for young adults at Arizona State College, Phoenix College, and Glendale Community College. She also co-founded Project Aware Men’s Shelter and Women and Children Homeless Shelter on Division Street in Prescott. As an extension of their concern for those in need, Glady and Lloyd were involved in the sanctuary movement, helping refugees in the process of resettlement by opening their hearts and their home.

For over 15 years, Glady served as a key administrator and leader of Just Faith Ministries, which inspires members to take action in addressing important social justice issues within their local communities. She was also a leader and advocate for the Coalition for Compassion and Justice, Interfaith Council, Anytown, and Our Town, Advocate for Children and Youth Justice Services, Diversity Alliance and Catholic Social Services.

A service to honor Glady’s life will be at 11 a.m. Oct. 15, 2020, at Sacred Heart Roman Catholic Parish, 150 Fleury Ave., Prescott, Arizona. In lieu of flowers, the family requests you donate to the Good Samaritan Society Prescott Hospice, or your favorite charity.