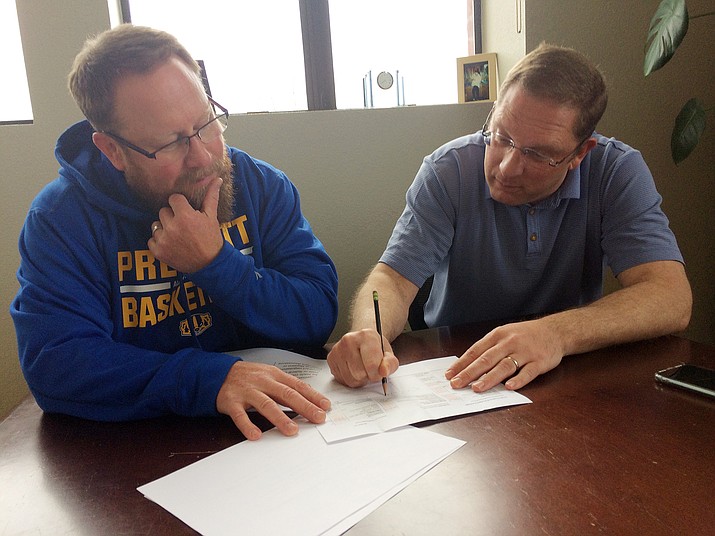 In addition, the taxpayers agreed to invest some $6 million — about $1 million over the course of seven years — into increasing faculty and staff salaries as means of attracting and retaining high-caliber educational professionals.

On Tuesday night, Oct. 6, PUSD Chief Financial Officer Brian Moore highlighted what the district has accomplished with those dollars; all but about $1 million spent to do what taxpayers voted to do.

As of June, the district spent $11.5 million with an additional $3.5 million allocated toward a new school bus for special education students, a reconfigured parking lot and playground area at Abia Judd Elementary School and newly paved parking lots at Prescott High and Granite Mountain schools. The remaining money that must be spent no later than 2023 is to be allocated toward additional technology.

Through the bond process, PUSD has been able to provide one-to-one technology devices for all six of its schools, upgrade the fleet of 35 school buses with 11 new buses, eight of them propane-fueled models with two diesel-fueled designated for out-of-town field trips, replaced the Prescott High School track, renovated Washington School, and did some $6 million of building and grounds repairs at the six schools, including new parking lots, roof repairs and upgrades to lighting, security and flooring.

Moore reiterated thanks to taxpayers for their commitment to the district, enabling through this bond to do one-time major repairs and purchases that the district would otherwise have been unable to afford through the dollars it receives based on enrollment.

The bond payments extend through 2030, but the district’s bond capacity is just under $200 million.

Moore said he cannot speculate on whether the administration or Governing Board will at any time in the near future consider pursuing another bond.

The good news for Prescott, and other districts across the state, is that in the last couple years the state Legislature has started to restore some of the capital dollars districts required to do the maintenance, technology upgrades and repairs needed for their students.

As for the budget override, the Governing Board voted to ask its residents to expand upon the existing override to cover the cost of increasing faculty and staff salaries so that they are closer to the state average.

The current override represents 4.66% of budget revenue and the proposed override is for 8%.

In other business, the Governing Board approved the final annual budget for the 2019-20 school year.

The good news is the district’s financial prudence in spending the approximately $27 million maintenance and operation budget, and a 40-student increase in enrollment, left them with about $3 million in budget reserves.

For the 2020-21 school year, some $350,000 of reserves was allocated to covering 5% across-the-board increases for all faculty and staff.

Moore said the district has been quite frugal and conservative in its current-year budgeting, and therefore, has been able to grow a financial cushion over the past few years. The COVID-19 pandemic will likely require the school board tap into some reserves as the district expects to lose some students this year.

“Who could have predicted in February when we did the (proposed) budget and raises for this year, that we were going to be faced with a pandemic? It’s a good thing we’ve been fiscally responsible.”