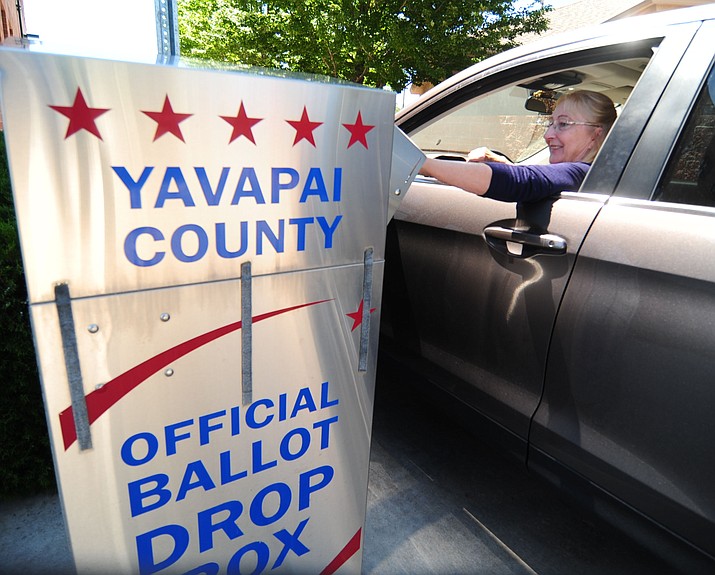 In this undated file photo, a Yavapai County voter drops off her ballot at the Yavapai County Administration building. Early voting in the state of Arizona began Wednesday, Oct. 7, 2020. (Courier file photo)

As voters fill out their mail-in ballots or go to the polls on Nov. 3 to select their national, state and local leaders, area taxpayers will also want to be certain to cast their votes for some local initiatives.

For Prescott Valley and Dewey voters, the ballot will include a request from the Humboldt Unified School District to approve a $30 million bond and 5% budget override.

If approved, the bond would allow the district to do: upgrades of aging buildings and furnishings; enhance technology, a need made more visible with the COVID-19 enforced distance learning requirement; improve school security; and build a new performing arts center for Bradshaw Mountain High School.

Bond advocates and board members stated HUSD is the largest district in Yavapai County, yet is at the bottom of the state in per pupil funding, or the sixth percentile. The annual HUSD budget is $36 million.

The budget override dollars would be utilized to hire 10 mental health counselors with the goal to put one in each of the district schools as well as hire 10 additional teachers to reduce class sizes.

HUSD will also be asking voters to approve selling the former district headquarters on Highway 69 so that those proceeds could be used to cover additional capital expenses. District leaders speculate that building could garner upwards of $1.5 million to assist with capital expenses.

Based on average property assessments, the projected additional cost to taxpayers is about $9 per month.

In Prescott, taxpayers will also be asked to vote on a budget override. Prescott Unified School District’s request is 8%, enhancing an existing 4.66% override approved five years ago along with a $15 million bond issue.

The added dollars would be used to increase salaries for PUSD’s faculty and staff who now are more than $5,000 below the state average for teachers. The override would allow for increases such that PUSD would be within about $3,000 of the average state teacher salary.

If approved, the enhanced budget override is anticipated to cost the average homeowner another $53.89 a year above the $678 a year he or she pays in taxes for school operations.

The existing $15 million PUSD bond costs that same homeowner another $38 a year, which sunsets in 2030.

HUSD and PUSD leaders encourage voters to read the ballot pamphlets related to these bond and override efforts, and be certain to check the ballot to be certain they have not missed their opportunity to cast their votes.