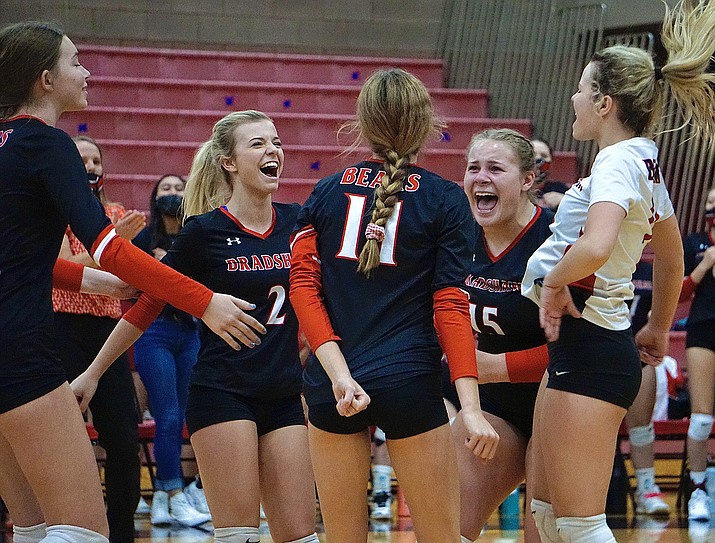 Bradshaw Mountain volleyball celebrates after the Bears scored a point during a match against cross-town rivals Prescott on Tuesday, Oct. 6, 2020, in Prescott Valley. (Aaron Valdez/Courier)

From a volleyball standpoint, the Prescott-Bradshaw Mountain cross-town rivalry has seen lopsided affairs both ways in recent years. The Bears easily defeated the Badgers in their last four meetings (spanning back to the 2018 season) while the Badgers have held the edge over the Bears basically every other year before that.

However, Tuesday night’s meeting told a different story as both teams battled tooth and nail for bragging rights. And despite Prescott taking 1-0 and 2-1 set leads, Bradshaw Mountain hanged tough to force a fifth set as it only took a well-placed serving ace from Nicole Shaver (37 assists, nine digs) to seal the enthralling 3-2 victory for the Bears.

“I really feel like these girls are still getting to know each other. Most of them are new to varsity and this is a new level of play that they’re getting used to,” Bears head coach Karrie Platt said. “That took guts and girt to come back and win that and to not give up,”

Both the Badgers and Bears sported winning records going into Tuesday’s match as a win would’ve given either side a nice boost in the Grand Canyon Region standings. In the first set, the two sides appeared evenly matched with neither of them gaining a lead more than three points.

Toward the end of the opening set, the Bears were one point away from the win but a couple of unforced errors and a team block by Lexi Wasil and Millie Diener gave the Badgers a 1-0 lead.

The second set saw more of the same back-and-forth tempo but the Bears started to slowly leak ahead by taking a 9-5 lead. Prescott eventually tied the set 19-19 off a Bears error but then a big kill by Katie Janzen (10 kills, 17 digs) sparked a 6-0 run, notching Bradshaw Mountain’s first set win of the night.

The Bears and Badgers continued to battle in the third set and it was a close game all the way through.

Prescott’s featured outside hitter Kate Radavich came up big to break the set deadlock after she hammered one hit -- which was masterfully dug by Bears libero Tristen Bangs -- and then followed up with another hit that was too hot to handle for the Bears.

“I love our team. We have such great relationships with each other,” Radavich said on the Badgers’ improving chemistry. “We fight so hard. Especially when we’re down, I just know I can count on them to get the energy back up and come back and get the lead.”

Bradshaw Mountain showed their grit in the fourth set as they dictated the pace. After tallying three straight points to make it 24-21, the Bears floundered a bit, which allowed the Badgers to close in on them. However, a nonchalant but well-timed tip by Bradshaw Mountain middle hitter Maggie Cross (eight kills) helped the Bears force a fifth set.

And without a doubt, the fifth set lived up to expectations. Once again, the Bears took control while the Badgers found themselves playing catch-up. But they managed to put together a late surge that was capped off by a Kari Kasun kill to give Prescott a 13-12 lead.

While on the brink of dropping the match, veteran outside hitter Abby Platt (17 kills, 13 digs) came to the Bears’ rescue and nailed a huge kill to even things up at 13. This set up Shaver, another seasoned veteran, who clutched it out and thread not one, but two serving aces to win the match for Bradshaw Mountain.

“I think we needed to stay mentally strong, we needed to calm down a little bit and play the game that we know,” Shaver said on the Bears’ mindset down the stretch.

As far as this renewed rivalry, second-year Prescott head coach Courtney Adams said it’s exciting for the players, the coaching staff and fans that both teams are competitive this year because it only adds to the lore of this heated but friendly rivalry.