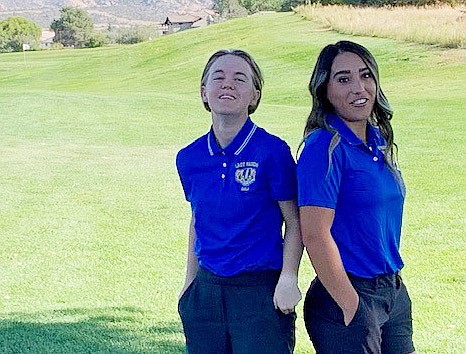 Prescott girls golfer Brannagh Woods, left, and Makayla Reyes were the Badgers’ best golfers in the their match against Seton Catholic on Wednesday, Sept. 30, 2020, at Antelope Hills Golf Course. Woods finished first with a 43 stroke score while Reyes finished third with a 46. (Debbie Fitzgerald/Courtesy)

Brannagh Woods was the top golfer on the day, finishing with a 43 score. Makayla Reyes came in third with a 46, Sarah Stovall came in fourth with a 53, Marleigh Fagin came in fifth with a 54 and Talisa Bruce tied for sixth place with a 61. The Badgers have now won five matches in a row.

The Prescott boys golf team traveled to Cerbat Cliffs Golf Course Kingman on Tuesday, Sept. 29 and placed second with a team score of 162 in a match against Lee Williams and Mohave.

Prescott’s Cade Buettner continued his hot play leading the way with a 38. Scotty Jackson shot a 40 while Chance Hill and Jacob McElfresh finished with rounds of 42. Jacobs 42 was his best round of the season and is quite impressive considering he has only been playing since March.

Brent Chambers shot a 44 for the fifth position. The Badgers are currently ranked 12th and are still well within reach of a second straight state tournament appearance. The Badgers have two scores they need to replace to hold on to their top-12 seating.

The Prescott Golf Club in Dewey is having an Armed Forces Tournament on Oct. 10. All proceeds will be given to the Prescott VA, Volunteer Services Fund, Guest Services Account.

The tournament is an 8:30 a.m. shotgun and a two-person straight scramble and there will also be prizes for gross and net winners (KP Additional Prizes). Par three hole in one car and golf cart for “The Shot.”

The cost to enter will be $69 per players, which includes green fee, range balls prizes and support for the men and women of the military.

The Chino Valley cross-country boys team placed first out of 25 schools in the small school division at the Desert Twilight Invitational on Thursday, Oct. 1, with 133 points.

On the girls side, Chino Valley finished in seventh place out of 19 teams with 210 points in the small schools division. 26.

Prescott badminton breezed past Deer Valley 9-0 in a road match on Thursday, Oct. 1. The Badgers didn’t drop one match through singles and doubles action as No. 1 Nicole Raiss, No. 2 Kailey Crockett, No. 3 Megan Townsend, No. 4 Cassideen Naylor, No. 5 Emily Nelson and No. 6 Riley Crockett each won their respective singles match.