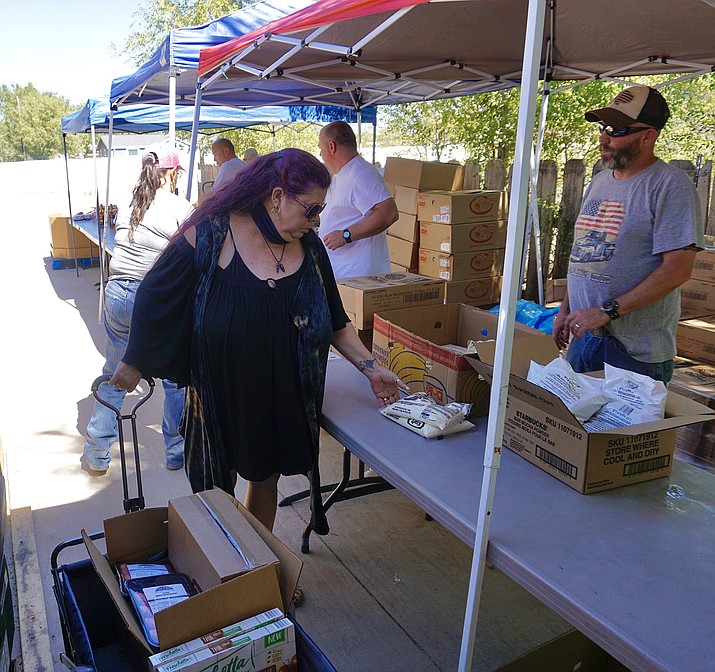 Volunteers distribute food to community members at the Paulden Food Bank next to the Paulden Fellowship Christian Church at 194 Aspen Road on Thursday, Oct. 1, 2020. The Paulden Food Bank has been providing free food to families in need every Thursday, and recently received a $10,000 donation from United Way of Yavapai County, which will be used to purchase and install a new walk-in freezer unit. (Aaron Valdez/Review)

As the coronavirus pandemic has slammed the country this year, especially in low-income communities, many charity organizations and companies have participated in helping those in need during these tough times.

Paulden Food Bank is doing its part to ensure every family in the surrounding area has enough to eat by providing food every Thursday at Paulden Christian Fellowship Church.

The Paulden Christian Fellowship started in 1994 as food was stored in the church’s attic and was occasionally given out to families who were in need. This makeshift food bank eventually grew, and in 1995, it transformed into an official food bank on the lot next to the church building on 194 Aspen Road in Paulden.

In 1998, the food bank received a trailer for storing the food and indoor distribution but in 2002 and 2003, church members had to cut back to just emergency food because of lack of funds.

However, the food bank then started doing biweekly distributions in 2004, and in 2006 it went to weekly service that served 15 to 152 households each Thursday. The food and produce is delivered to them from Saint Mary’s Food Bank (SMFB) in Phoenix, as they receive around 814 pounds of food every week.

“I’ve been here going to this church and food bank for 17 years,” said church member and food bank worker Ralph Sabatino. “We started to just grow and I mean, not so long ago, we were doing 80 to 85 families. Last week, I think we did 120 something.”

Today, the Paulden Food Bank is a 501(c)(3) organization and has developed into a staple of the town and has served its purpose exceptionally well during this pandemic, which explains the jump in the number of families picking up food. Under normal circumstances, the food bank will operate inside a building adjacent to the Paulden Christian Fellowship Church, which is now used to store most of the food.

Due to the pandemic though, the food bank was forced to switch gears and transition to operating right outside the same building under a tent. Every Thursday from 10 a.m. to around 3 or 4 p.m., families will sign in and then line up around the building.

They are then given a small cart to help them carry the groceries, which are given to them by workers when they walk by a row of tables. The families are given generous portions of meats, fruits, vegetables and grains. Finally, food bank workers will then help families load their food into their vehicles.

Sabatino said that whatever food is left over after the day is sent out to different outreaches. 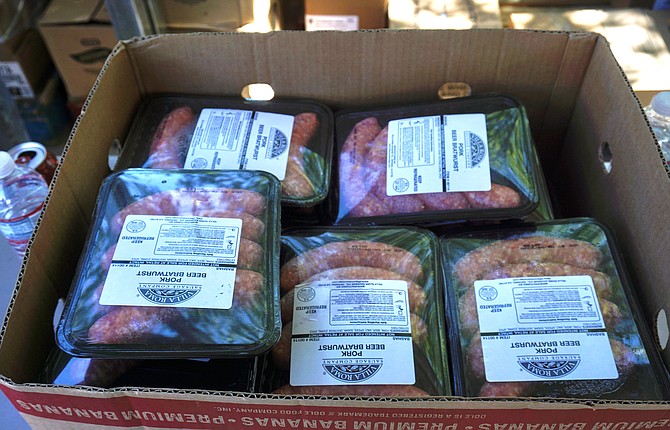 Pork beef bratwurst was one of the food items the Paulden Food Bank was giving out to families on Thursday, Oct. 1, 2020, at 194 Aspen Road in Paulden. (Aaron Valdez/Review)

The United Way of Yavapai County began in 1987, organized by volunteers to raise money to help operate local charities. It remains a volunteer-driven organization that operates independently of all, meaning all the money it raises in the community stays in the community.

The Paulden Food Bank applied for one of United Way’s grants and wound up receiving a $10,000 donation, which will be used to purchase a brand new walk-in freezer unit. The new much-needed unit will be installed into their building in a few weeks and will be used to store more food, specifically meats, to better serve the community during these unprecedented times.

“We just want to say thanks for all [United Way’s] help,” Paulden Food Bank director Tom Oliver said. “They were able to help us through the coronavirus, keep the food coming in, stock out shelves and getting us a freezer.”

In addition to the $10,000 for the new freezer, United Way also donated another few thousand dollars that will be used for food and renovations to the food bank building. This will definitely come in handy in November and December when the food bank gives out holiday boxes for Thanksgiving and Christmas for approximately 150 families.