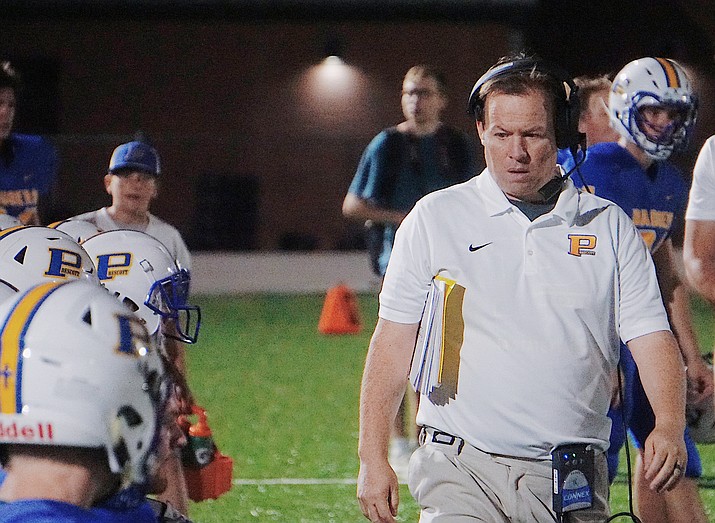 Prescott head coach Cody Collett walks along the sideline during a game in 2019. The Badgers suffered a season-opening 31-15 loss to Lee Williams on Friday, Oct. 2, 2020, in Kingman. (Courier file photo)

EDITOR'S NOTE: This story has been updated from an earlier version to reflect the right location of Lee Williams' next game.

KINGMAN — Senior running back Nathan Wright had more than 150 yards on the ground and two touchdowns, but it wasn’t enough to keep Prescott football out of the loss column in a 31-15 defeat against Lee Williams on Friday night.

The Badgers led 15-7 with 4:14 to go in the first half after back-to-back scores by Wright but surrendered 24 unanswered points to the Volunteers the rest of the way.

“We battled hard. We have a really young team, 12 sophomores are playing right now,” Prescott head coach Cody Collett told the Courier in a phone interview Friday night. “There was definitely times you could see the missed weight room time [Due to COVID-19 restrictions]. We followed protocols to a tee, but you can only do so many pushups.”

It is the first loss for Prescott in program history to Lee Williams (1-0, 1-0 Grand Canyon), which opened its doors to students in 2012 and competed in their first football season in 2013.

“We’re going to get better every week. That’s our goal. Every Friday night we get in 2020 is a blessing,” Collett said.

The Volunteers have managed only one winning season in their brief Arizona prep football history, a 7-3 mark in 2014. They have gone 17-32 since, not including Friday night’s season-opening win against the Badgers.

The first few possessions inside the red zone did not go well for Prescott.

Quarterback Wyatt Snyder fumbled inside the 10 on the Badgers’ first possession, then Cody Leopold did the same inside the 15 a short time later.

In-between, Lee Williams special teams’ star Rye Samson returned a Badger’s punt 93 yards for a score to give the Volunteers a 7-0 lead with 1:10 to play in the first quarter.

After Wright gave Prescott (0-1, 0-1 Grand Canyon) a 15-7 lead with two touchdown runs, including an 11-yard scamper at the 4:14 mark in the second quarter, Lee Williams running back Jimmy Berry scored to cut Prescott’s lead to one, 15-14, then Justin Wright hit a field goal as time expired to give the Volunteers a 17-15 lead at halftime.

“He’s playing tailback and sam linebacker. That’s tough to do,” Collett said about Wright. “He’s one of the few kids that has played a lot of varsity football. I’m proud of him”

Late in the third quarter, Berry scored his second touchdown of the night to give Lee Williams a 24-15 lead, then came up with a big interception against Snyder to set up a 15-yard Devean Santos touchdown run with 4:24 to play, putting the game out of reach for Prescott, 31-15.

Prescott heads home to host Apache Junction, their only non-conference opponent of the season. Kickoff is set for 7 p.m. Friday, Oct. 9.