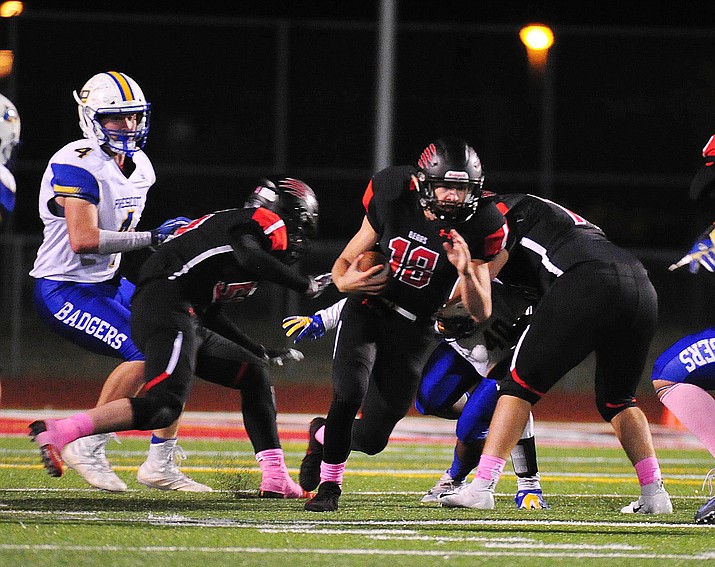 BULLHEAD CITY — Quarterback Josh Grant threw for 229 yards and four touchdowns, running back Elijah Acuna had two scores and the Bradshaw Mountain football team earned their first shutout since 2017 with a 56-0 victory over Mohave on Friday afternoon.

It is Bob Young’s first victory as coach of the Bears after being hired in the offseason to replace Chuck Moller, who unexpectedly passed away in May.

Young, who led Bradshaw Mountain rival Mingus for years in Cottonwood, said he wasn’t surprised at all how well the Bears did in the air.

“We’re keeping the same offensive philosophy as they’ve had in the last few seasons,” said Young, who is a typical Wing-T formation-type offensive coach. “These guys aren’t Wing-T guys. Coach Gary Cook has had these guys for three years. They have this offense down, so it’s a little different for me.”

Grant completed 14 of 20 passes and ran for 67 yards against the Thunderbirds (0-1, 0-1 Grand Canyon), which managed only 43 yards and one first down offensively against a stingy Bears defense.

“They were overwhelming. I was very pleased,” Young said about his defense. “Our defense had a great game plan, we thought we could have a really good defense this year.”

Acuna’s 1-yard touchdown run put the Bears on the board at the 5:54 mark in the first quarter to make it 8-0. Grant than proceeded to throw four touchdown passes in the Bears’ next six possessions offensively, capping it off with a 65-yard strike to wideout Moises Hernandez to begin the second half to make it 49-0.

Hernandez had five catches for 109 yards to go along with his touchdown reception.

Backup sophomore quarterback Grady Rose had a fun moment near the end of the second quarter, throwing a 47-yard touchdown to Phetinta, his first career high school throw.

“I laughed and looked at Josh [Grant] and said you might have just lost your job as starter,” Young chuckled, adding that Grant was on the sideline for a play due to a helmet issue and the referee taking him out.

“Josh is our quarterback, but we’re blessed to have two guys like that,” Young said, adding that Rose, who is a sophomore, is “special” and will be the future of the Bears soon enough.

Bradshaw Mountain returns to Prescott Valley in Week 2 as the Bears host Flagstaff (1-0, 1-0 Grand Canyon) on Friday, Oct. 9. Kickoff is set for 7 p.m.

Mohave heads south in Week 2 to face the Marauders in Cottonwood. Kickoff at Mingus (0-1, 0-1 Grand Canyon) is scheduled for 7 p.m.

(Watch this website for more scheduling and results as the season progresses.)