No. 4-ranked Cactus looks the part of title contender after 59-7 rout over Badgers in state play-in round
Prep Football 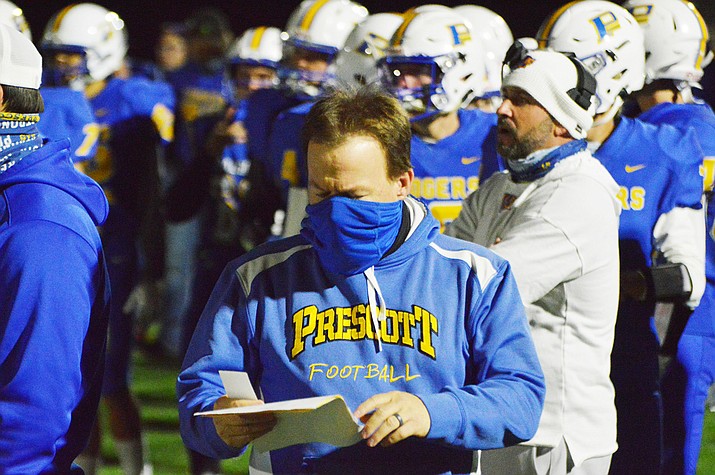 Prescott football head coach Cody Collett looks at his play sheet on the sidelines Friday, Nov. 13, 2020. The Badgers earned a spot in the 4A state play-in round, but were turned away by No. 4-ranked Cactus by a final score of 59-7 on Friday, Nov. 20, 2020, in Glendale. (Brian M. Bergner Jr./Courier, file)

GLENDALE — Quarterback Will Galvan tossed two touchdowns and caught another, Aki Pulu and Antonio Pratt each scored and No. 4-ranked Cactus looked every bit like a Top 5 team in state with a 59-7 rout over Prescott on Friday night.

It is the fifth straight win for the Cobras (6-2, 3-0 West Valley), which haven’t lost to a 4A conference opponent this season.

“I know Mesquite is pretty good, but this Cactus team could be holding up the 4A state title trophy in a few weeks,” Prescott head coach Cody Collett said in a phone interview with the Courier.

Collett added that Friday night’s game had a playoff atmosphere.

“That was a state playoff game, no matter what the AIA calls it [play-in round] so they can run their bracket show,” Collett said.

Cactus’ only two losses on the season so far have come against 5A conference No. 1-ranked Desert Edge (12-0) and No. 3-ranked Sunrise Mountain (also 5A) to open the season, 48-7.

Entering Friday night’s contest, Prescott senior running back Nathan Wright needed only 31 yards to eclipse the 1,000-yard rushing mark on the season, and for the first 46 minutes in Glendale, it didn’t look like he was going to get it.

But, in one of the final Badgers’ runs of the night, Wright broke three tackles and sprinted down the right sideline for an 80-yard touchdown run.

“In eight games, to have 1,000-plus yards. Plus, he plays on defense? It speaks to his character, his toughness,” Collett said.

Galvan found wide receiver Joseph Lagafuaina on a 25-yard touchdown strike to begin the game’s scoring Friday, then backup quarterback Chase Jasinski tossed another touchdown to Lagafuaina with 3:31 to play in the first quarter and Cactus jumped out to a 16-0 lead.

Pulu’s 17-yard touchdown run with 2:03 left in the second quarter made it 23-0 Cactus. Then Galvan tossed his second touchdown of the night, this time to Chris Thomas to make it 31-0 with 56 seconds left before halftime and the Cobras never looked back.

Prescott (4-4, 4-2 Grand Canyon) enters the offseason having played 17 sophomores in 2020, potentially giving fans something to look forward to over the next two seasons, especially finishing the fall with a 4-1 record after starting 0-3.

“I’m really extremely proud of our seniors, to come back from 0-3 and win four straight and get in the playoffs, I couldn’t be more proud of our seniors,” Collett said. “We have some good kids coming back, hopefully we can put in the time due to everything that’s going on [with COVID-19].”

“It’s a group I will always remember fondly, I don’t think I’ve ever had a team improve this much,” he added.

No. 4 Cactus will host No. 5 Coconino in the 4A state playoff bracket, the AIA released Saturday. The eight-team field also includes No. 1 Casa Grande hosting No. 8 Peoria; No. 3 Mesquite hosts No. 6 Northwest Christian; and No. 2 American Leadership (ALA-QC) hosting No. 7 St. Mary’s.