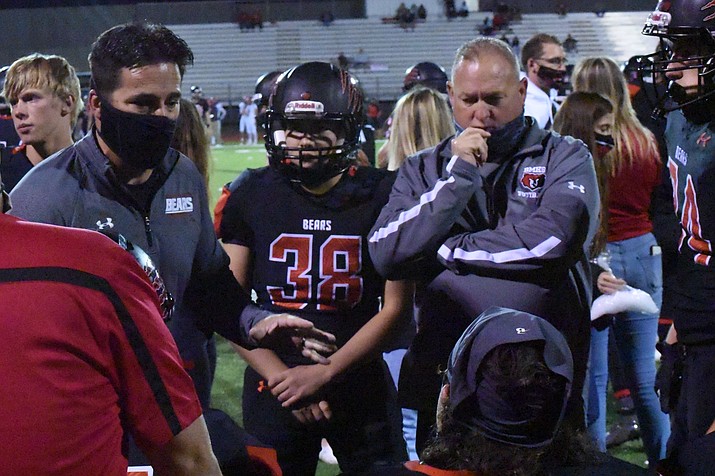 Bradshaw Mountain coaches talk to their team on the sideline as the Bears host Lee Williams on Oct. 16, 2020, in Prescott Valley. The Bears were scheduled to play Deer Valley to wrap up the season Friday, Nov. 20, but the game was cancelled due to positive COVID-19 tests on the Skyhawks’ team Friday morning. (Jesse Bertel/Courier, file)

Young added that Deer Valley reported its cases to Bradshaw Mountain at 10 a.m. Nov. 20. No Bears players tested positive for the virus this entire season, the coach said.

“Our guys were ready to play,” said Young, who has now completed his first season of coaching the Bears. “They are bummed out.”

At 1 p.m. Nov. 20, the Bears’ athletic department confirmed the game’s cancellation on social media, although the department gave no reason for it.

The Bears were hoping that by playing the extra, non-playoff game to end the coronavirus-shortened 2020 campaign, they could snap a three-game losing streak and enter the offseason on a positive note.

Bradshaw Mountain had scheduled the Nov. 20 contest at Deer Valley in Glendale after its Week 7 loss to 4A No. 4-ranked Cactus Nov. 13 in Prescott Valley.

No. 22-ranked Deer Valley (3-4) concluded its season having lost four of its last five games. No. 20 Bradshaw Mountain also finished with a 3-4 record (3-3 Grand Canyon region).

“This year was not about the record,” Young said. “It was about establishing culture and attitude. I’m proud of our players and staff for doing what we had to do to make it through the season unscathed.”