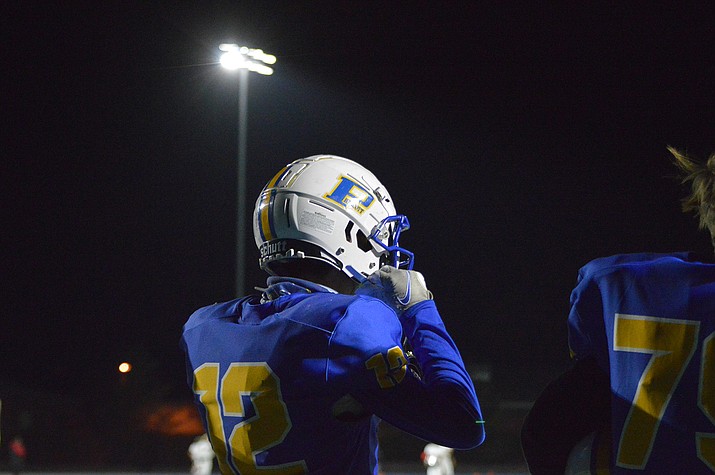 Who: #13 Prescott Badgers at #4 Cactus Cobras

Tickets: Due to COVID-19 restrictions, only 150 tickets were given to the Prescott football team for distribution among players, parents and coaches. Unless you have an AIA pass, Cactus High School is not selling tickets to the general public, and will not have a ticket booth for walk-up fans.

Last Week: Prescott — Nathan Wright and Cody Leopold each ran for three touchdowns, quarterback Wyatt Snyder was 5 for 5 for 93 yards and the Badgers used a 26-0 run after trailing 23-8 to beat rival Mingus 43-35 a week ago. Cactus — Quarterback Will Galvan completed 10 of 17 passes for 197 yards and three touchdowns, Gabriel Reyes and Ata Teutupe each ran for a score and the Cobras made quick work of Bradshaw Mountain in Week 7 by the final score of 54-17.

The Setting: The Badgers will have their hands full with No. 4-ranked Cactus on Friday night. The Cobras played two Grand Canyon region opponents this season, outscoring Flagstaff and Bradshaw Mountain (in Flagstaff and Prescott Valley, respectively) by a combined score of 99-23. Cactus’ only two losses on the season came against 5A conference No. 1-ranked Desert Edge (12-0) and No. 3-ranked Sunrise Mountain (also 5A) to open the season, 48-7. If the Badgers are to have a chance, their defense must find a way to contain sophomore standout quarterback Will Galvan, who has thrown for 899 yards and nine touchdowns this season. Antonio Pratt (18 catches for 277 yards and three touchdowns) and Justin Gomez (20 catches for 247 yards and two touchdowns) are Galvan’s top targets. Also keep an eye out for tailback Damian Jiles. The sophomore has five touchdowns and is averaging 72.1 yards per game on the ground (505 total yards rushing in seven games).

Playoff Watch: Prescott must beat Cactus to punch their ticket to the eight-team playoff bracket in the 4A this season. The winners of Friday night’s games will advance as the top eight seeds to play Nov. 27 (quarterfinals), Dec. 4 (semifinals) and on Dec. 11 in the state finals.