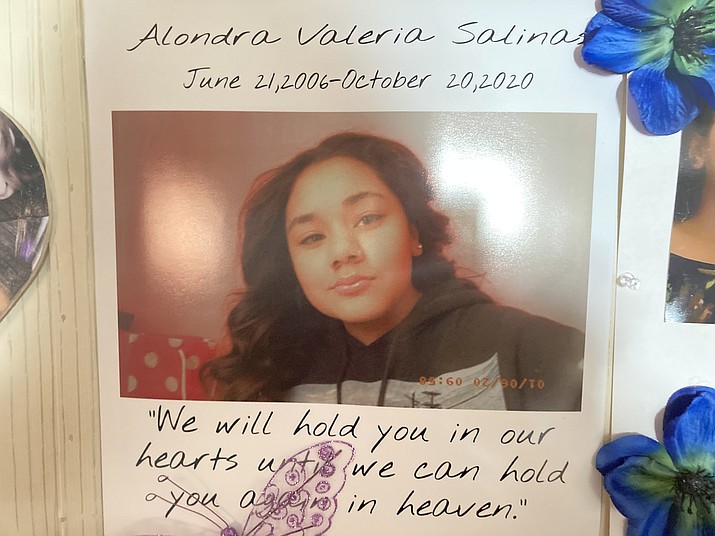 This photo of Alondra Salinas is displayed at her parents house, a tribute to the 14-year-old who died Oct. 20, 2020, of fentanyl-related overdose the day before she was to become a freshman at Bradshaw Mountain High School in Prescott Valley. In the last year, MatForce has identified eight fentanyl-related deaths of teens, six of those in the Prescott Valley area. (Nanci Hutson/Courier)

Yet she doesn’t want to deprive people of prescription fentanyl, a potent painkiller that can be part of a doctor or surgeon’s medical toolkit for their patients.

To marry those two missions requires dissecting what is legal and what is criminal — and Fowler and her agency have put together a Dec. 7 webinar to explain the difference while highlighting the crisis that has erupted across the Yavapai County.

This year in Yavapai County, there have been 33 deaths, with another 10 last year. Since MatForce started a county-wide fatality review board five years ago, there have been more than 50 fentanyl-related fatal overdoses.

Fowler and fellow prevention advocates are aligned with grieving family and friends who want to put a stop to such losses. They want teens to know this drug so easily disguised into pills touted as a safe way to escape their everyday stresses can kill them.

MatForce is far from alone in this struggle.

Law enforcement, educators, community activists, civic and teen leaders in area communities want to stop the spread of what one grieving parent suggested is a true pandemic — kids dying because they are young, naïve and seemingly invincible.

Sommer Cupp, who with husband, Mike, is aghast that the fentanyl intoxication death of their 17-year-old, Hannah, was the first of what ended up to be three teen deaths in less than a year.

They know the agony, and are desperate to find a way to alert teens to be aware of anyone willing to supply them with such a lethal substance. Parents can only supervise their teenagers so much, Sommer said. This battle needs to be waged by teens armed with information and a willingness to fight back — with the help of parents, law enforcement, school officials and other adults who teens trust to battle this scourge with them.

“I don’t care how close you think you are to your child. They have secrets! It’s sad that we only figure out those secrets when they die,” said Sommer Cupp in an email message.

Sommer is not Hannah’s biological mother but raised her with her husband, Mike, since she was a toddler; the two together have two other teenage daughters. Sommer said she and Hannah shared a tight relationship. Still, she was unwilling to heed advice about certain friends and standing firm against their influences.

“It’s the kids that need to be aware,” Sommer declared.

In December 2018, Armed to Know in Prescott, a parent-organized, scientific-based nonprofit aimed at enlightening parents and teens about relevant issues in their lives, hosted an emergency forum about illegal fentanyl in the community.

The event held in the Ruth Street Theater was attended by some 300 teens and parents.

One of the most poignant talks came from a former Prescott High School student who was then serving time in the Yavapai County Juvenile Detention Center related to a second arrest for drug offenses.

The then-16-year-old Caleb Benjamin stunned students with his candor about his presence at the death of a friend who suffered a fatal overdose from ingesting three fentanyl-laced Percocet pills at a party they attended in Phoenix. He implored his peers to find their thrills in ways other than swallowing a pill that could kill them or someone they love.

“We want to provide public awareness through any avenue we can,” Fowler said of offering webinars, in-class presentations, news announcements, and continuous social media campaigns.

MatForce now has a billboard campaign: “One Pill Can Kill.”

When it comes to awareness, Fowler said this is not a one-and-done conversation. Parents need not be afraid to be annoying when repeating to their teens that their lives are too valuable to risk on a pill.

Just grains of the counterfeit fentanyl put into aspirin, Xanax, Percocet, or any number of known prescription pills, can prove deadly, whether it’s the first time someone tries it or they are a repeat user, Fowler said.

This generation is losing too many too soon and they need to see fentanyl as their foe, and strike back, advocates said.

“We just have to hit it from every angle to make sure people realize what we’re dealing with right now,” Fowler insisted.

For a more in-depth story on these teens, visit dCourier.com.