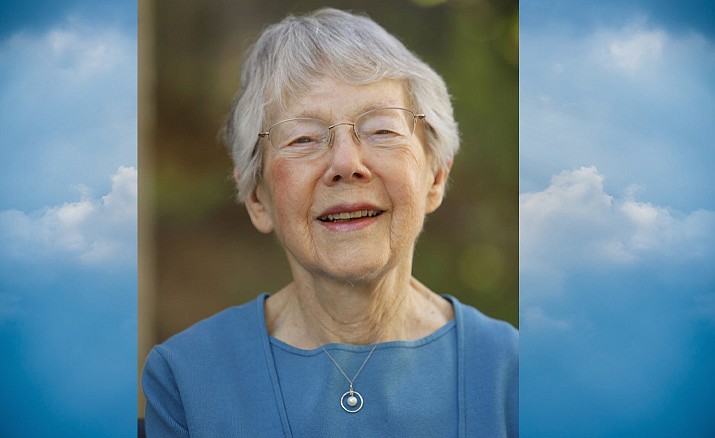 Patricia (Pat) Huddleston Gryson, 91, passed away peacefully at home on Sept. 13, 2020, in the presence of her family.

Pat will be remembered for her tireless work ethic, her dry sense of humor; her cheerful smile and infectious laugh; her friendliness, compassion and selfless desire to help others; and her lifelong love of learning and education. These traits manifested in multiple ways throughout her life and touched many.

Pat was born Nov. 22, 1928, to Henry and Jennie Huddleston in Prescott, Arizona. A 1946 graduate and Merit Cup recipient of Prescott High, Pat was the first in her family to go to college, graduating in 1950 from the University of Arizona with a BA in Education. After graduation, she moved to San Francisco with a sorority sister to begin her teaching career. She went on to earn her Masters Degree in School Administration from University of San Francisco in June 1964 and worked for the San Francisco Unified School District for 13 years, first as a teacher and later as Assistant Principal.

Pat met Joe Gryson on Thanksgiving Day in 1959 in a humorous incident of mistaken identity. She declined his first invitation for a date, but he was persistent; she eventually agreed to go out with him and they were married two years later. In 1964, their first child, Karen arrived.

Pat continued to work until she and Joe decided to move to San Rafael, California, to open his orthodontic practice. She then resigned and devoted her energy to her growing family, as their second child, David, was born in early 1966.

Although Pat gave up her teaching career, she sought opportunities to use her educational background to serve the community. When the children were young, Pat served as President for the Women’s Dental Auxiliary. She served two terms on the Dixie School Board, from 1971-1979, and was influential in setting standards and curriculum.

Once the children were grown, Pat found new ways to remain actively involved and serve the community. She worked with the Marin Literacy Project, helping adults learn to read and develop their writing skills. Pat always took a personal interest in her students, becoming a valued mentor and trusted confidante, as well as a beloved teacher. She also enjoyed hiking weekly with friends, ushering at the Marin Symphony, and volunteering in the gift shops at Kaiser Hospital and the Marin Civic Center.

Pat worked at Macy’s for many years in the Housewares Department, considering herself more of a cookware consultant than a clerk. She was active in an investment club, and took tax classes at College of Marin to become an Enrolled Agent. She then built her own tax practice, which kept her busy until 2011 when her vision became so impaired by macular degeneration that she had to give it up.

In her last years, Pat’s mobility became increasingly limited and her vision continued to deteriorate, yet her mind stayed sharp. She spent much of her time listening to audiobooks, favoring biographies and historical works; she never stopped learning.

Pat is survived by her husband, Joe; her daughter, Karen; her son, David; her sister, Doris; and nine nieces and nephews. She was predeceased by her brother, Bill Huddleston.

Our family would also like to express our deepest gratitude to Rose, Pat’s dedicated and loving caregiver of many years.