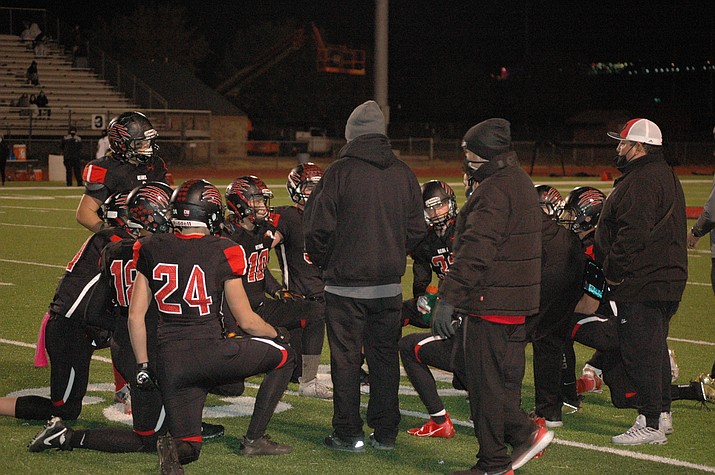 Bradshaw Mountain wasn’t expected to fare well against 4A No. 3-ranked Cactus on Friday night, Nov. 13, but the Bears gave it their best shot while looking forward to a brighter future in 2021.

Cactus quarterback Will Galvan threw three touchdown passes of 31, 40 and 35 yards and backup QB Chase Jasinski tossed TD strikes of 23 and 59 yards to lead the Cobras to a 54-17 victory over No. 18 Bradshaw Mountain at Bob Pavlich Field in Prescott Valley.

Although the Bears still have a chance to play another game on Nov. 20, their record dropped to 3-4 in this coronavirus-shortened regular season. Last week, Bradshaw Mountain ended Grand Canyon region play with a 3-3 mark.

“We hope to pick up a game if we don’t make the playoffs,” first-year coach Bears coach Bob Young said. “Hopefully we will have one more game.”

The Bears came into the 2020 season inexperienced and green, but they have steadily shown promise with a talented group of underclassmen.

“They’ve got to get better,” Young said. “A lot of times when you have sophomores, this is a big step up [being on varsity]. The future is bright if we do what we need to do.”

Bitten by injuries and ineligibility late in the season, the Bears lost their third straight contest on Friday after cruising to a promising 3-1 start.

“If we continue to take coaching and stay with each other like we have been, and keep pushing and working, we will be good eventually,” Bradshaw Mountain sophomore wideout Malachi Stephenson said.

Meanwhile, the West Valley region champion Cobras wrapped up their regular campaign with a 5-2 record (3-0 region) and appear ready for a serious run in the 4A state playoffs.

On Friday, Cactus put an exclamation point on the regular season, registering its fourth consecutive win after a tough 1-2 start. However, the Cobras’ losses didn’t hurt them, as they succumbed at home to 5A No. 3 Sunrise Mountain on Oct. 2 and 5A No. 1 Desert Edge on Oct. 17.

Bradshaw Mountain committed four turnovers in the first half against Cactus and never recovered, trailing 18-0 at the end of the first quarter and 33-3 at halftime. Bears senior quarterback Josh Grant booted a 33-yard field goal with 6 minutes left in the second quarter to help his team avoid the shutout.

Backup sophomore QB Grady Rose, who took over for Grant as the game was out of reach, threw a pair of TD passes late. He tossed a 22-yard strike to Aiden Ott with 2:59 to go in the third quarter and a 21-yard bullet to Makhy Phetinta with 19 seconds left in regulation.

“I just tried to do the best I can,” Rose said. “…We put what we can on the field. We look at this [season] as a building block for next year. We will come back ready to go next season.”

Cactus will play host to a 4A conference state play-in round game at 7 p.m. Friday, Nov. 20, against an as-yet-undetermined opponent in Glendale.

Bradshaw Mountain wants to play one more game before finishing the season, but Young said he likely would not know if his program could schedule an opponent until early in the week.