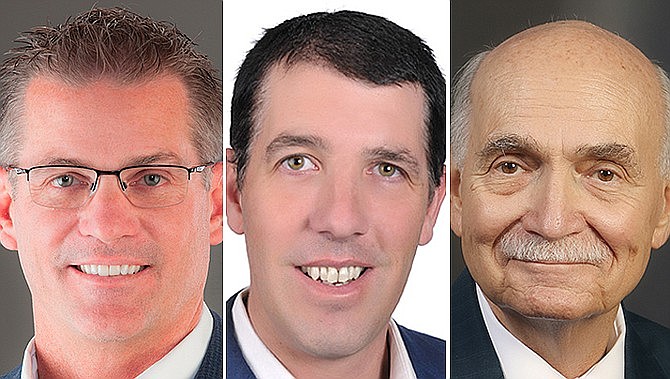 Thirty-four states and the District of Columbia require people to wear face coverings in public to curb the spread of COVID-19. Arizona is one of only 15 states without a mask mandate. The virus is currently spreading at its fastest rate in Arizona since June, and health experts are warning that hospitals could soon be overwhelmed.

Some Arizona cities such as Scottsdale, Phoenix, Tucson, Flagstaff and Sierra Vista have enacted their own mask orders.

With the virus surging across the county and state, the Courier asked the mayors of Prescott, Prescott Valley and Chino Valley if they are reconsidering their position and might require people to wear face coverings in public to reduce health risks. Their answers follow.

Prescott Mayor Greg Mengarelli said this week that he had asked City Manager Michael Lamar to discuss the COVID-19 issue during a staff meeting on Thursday, Nov. 12.

After that meeting, Mengarelli said, “We have some very good protocols in place that we feel are working very well.”

Based on that, he said he does not anticipate any changes in the way the city is doing business, or in its face mask policy.

Among the protocols that have been implemented during the pandemic, Mengarelli said, is the limitation of attendance at City Hall meetings to 30 people in council chambers and 16 in the lobby.

In addition, the city has installed sneeze guards and other barriers throughout its buildings and has instructed employees to take precautions, such as frequent hand-washing and staying home when ill.

During the Thursday meeting, Mengarelli said city staff indicated that they were comfortable with the protocols that are currently in place.

Regarding face masks, Mengarelli said the city has suggested when people should wear a mask, such as when they are inside and cannot socially distance.

Terri Farneti, public health coordinator with the Yavapai County Community Health Services, said that although contract tracers have not seen a common thread in their investigations, health officials believe the recent spike can be traced more to small gatherings that occurred around Halloween, perhaps indoors.

The city took that information into account when deciding to go ahead with its Veterans Day parade on Nov. 11, and likely would also use it going forward for the coming holiday events, Mengarelli said.

Based on the comfort level of city staff and the relatively low number of COVID-19 cases among city employees (10 since March), Mengarelli said he does not anticipate any imminent closures of city buildings, such as City Hall or the Prescott Public Library.

“We don’t have any changes planned,” he said Thursday.

Still, city officials say they will be closely monitoring the rising numbers in the coming weeks.

To keep an eye on the situation, the city will be conducting meetings every two weeks, Prescott Community Outreach Manager John Heiney said, with the next staff meeting set for Nov. 25.

Prescott Valley Mayor Kell Palguta said the town “has been and will be committed to the safety of all of its citizens and visitors throughout this holiday season,” but stopped short of saying that the town would implement stricter COVID-19-related restrictions at holiday events.

“The Town of Prescott Valley will continue to encourage safe practices at all town events and allow each citizen to make the decision as to which events they would like to partake in,” Palguta added.

Palguta said Prescott Valley offers a variety of holiday-themed events, such as the Valley of Lights, which allows participants to “remain completely isolated in their vehicle while still enjoying a variety of seasonal holiday light displays.”

“For others who feel more comfortable being in public, the Town of Prescott Valley will host their annual Light Parade and lighting of the Town Center on Dec. 4,” Palguta added.

“All citizens are invited and welcome to enjoy the marvelous event that has grown to be a great tradition in Prescott Valley.”

As for preventing the spread of the coronavirus from school children to family members and others, Palguta countered, saying, “The health and safety of all of our citizens is always a top priority, no matter what the circumstances that are currently occurring.”

He added, “… I am currently much more concerned about our children’s social, emotional and mental health needs being met, as well as the fact that a large majority of students count on school breakfast/lunches as the only substantial meal they receive during the day.”

Palguta said that “the mitigating steps” taken to stop the virus’ spread should “be looked at closely and continue to be monitored to ensure that the overall health of our youth is protected, not just worrying if a student catches COVID-19 or not.”

He added that Prescott Valley has faced and continues to face other sinister threats during the pandemic.

“Currently [as of Nov. 10], no child has passed away from COVID in our community, as opposed to multiple children in our area who have passed away since March from suicide, accidental opioid overdose and car accidents,” Palguta said. “We must remember that the steps taken today to try and mitigate exposure can send a ripple effect for years to come throughout our school children’s academic lives and home lives.”

Current Mayor Darryl Croft said that from now until he steps down from office in early December, he doesn’t see Chino Valley making any significant changes to the way the town has handled the prevention of the spread of the virus.

He said the numbers have not risen enough within the town to the point where more action needs to be taken. Currently, there is no mask mandate in Chino Valley and the only mandate that is active is that a public event is not allowed to have a gathering of 50 people or more, per Gov. Doug Ducey’s order. However, the town is encouraging its citizens to wear masks as much as possible.

When talking to Mayor-elect Jack Miller, he said he is open to adopting any mandate that President-elect Joe Biden or Ducey may implement in the near future.

“I know we will follow whatever we have to follow,” Miller said. “We’re going to have to follow whatever directions come from ultimately the governor, but the governor is going to get his direction from the president so, we will fall in suit to whatever we have to do … You got to do what you got to do to get past this thing and get back to normal life again.”

Miller added that if there is a mask mandate, he is unsure as to who will enforce it but hopes to have more answers when the time comes.