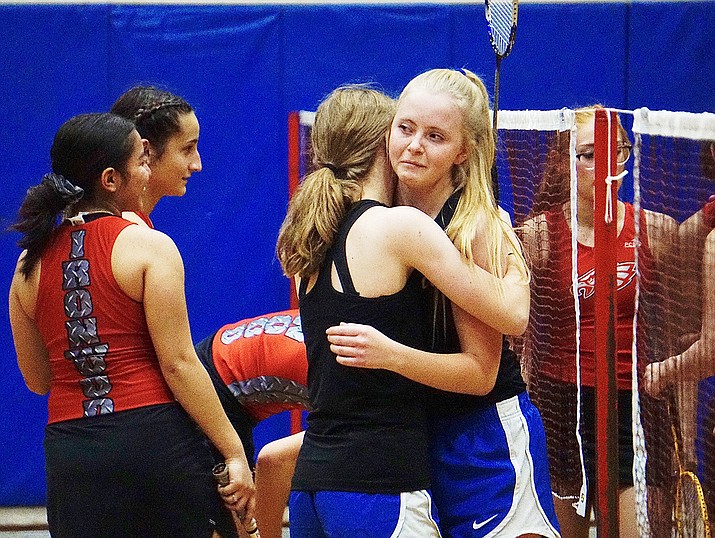 Prescott doubles team Kailey Crockett, left, and Cassideen Naylor, right, console each other after losing their match against Ironwood during the state semifinals on Wednesday, Nov. 11, 2020, in Prescott’s Auxiliary Gym. Ironwood won the match, eliminating the Badgers from state title contention and ending their season. (Aaron Valdez/Courier)

PRESCOTT — Up until this point, Prescott badminton had not lost a single match all season but the one time it did, it ended their chances at a state title.

And this heartbreaking season-ending loss was at the hands of No. 3 Ironwood, who were performing just as well as the No. 2 Badgers, going undefeated in their previous 12 matches.

It was evident these two sides were on a collision course all season and in their match on Wednesday, Nov. 11, at Prescott’s Auxiliary Gym, it was the Eagles who had the Badgers playing from behind all night.

In the end, Ironwood proved to be the better side that night, punching their ticket to the state championship against Campo Verde.

On the other hand, the Badgers’ dreams of winning a state title will have to wait for another day.

“These girls have definitely battled all season long and they’ve earned everything that they’ve gotten and they’ve earned that top four spot,” said Prescott head coach Bobbi Yoder. “It’s unfortunate that we had to play Ironwood in the semifinals because I really felt like they were the team to beat … I feel like any given night, we could’ve beaten Ironwood too. This just as easily could’ve gone the other way tonight, just a few points here and there.”

The Badgers’ top of the lineup struggled in singles action as No. 1 Kailey Crockett, No. 2 Nicole Raiss and No. 3 Megan Townsend all lost their respective match.

However, No. 4 Elle Long managed to defeat her opponent while No. 6 Riley Crockett competed in the most entraining match of the evening.

Riley was the only thing standing in the way of an early 5-1 victory for the Eagles. She and her opponent Juliana Traylor-Rowen battled back and forth, especially during the second game where Riley already held a 1-0 game lead.

With the second game coming down to the wire, Riley began to feel frustrated with her performance and also tweaked her ankle.

A timeout was taken for Riley to collect herself and it ended up paying off as she closed out her match in dramatic fashion to earn the 2-0 win and keep the Badgers alive.

“I was kind of frustrated because I’m a freshman and this is my first year ever playing, so I was really stressing and I didn’t want to let [the team] down,” Riley said. “I think I just wanted it so bad. After I got hurt, [Traylor-Rowen] was going to think that she can get me easy now but I didn’t want her to think that. I wanted her to deserve it but she couldn’t.”

In doubles action, however, the wheels quickly fell off for Prescott as they faced the tall task of claiming all three matches to complete the comeback. Ultimately, the No. 2 duo of Kailey Cassideen Naylor were the first ones to fall 2-0 and that’s all Ironwood needed to seal the deal.

According to Prescott athletic director Missy Townsend, this is the farthest the Badgers have advanced in the state playoffs since the team won a state title back in the 1980s.

This is also the Badgers’ best season under Yoder as they’ve never made it past the first round while she’s been the head coach.

Prescott went 16-1 this season and recorded an impressive 10 9-0 shutouts along the way.

Under Yoder, Prescott badminton has evolved into a robust program and one of the perennial powerhouses in Division II. While the Badgers will be losing key seniors Kailey, Naylor, Nelson and Christina Carter next year, they will still retain an abundance of talent, including Raiss, Townsend, Long, and Riley.

“Going into next year, we have even more potential to kick butt and do great and I’m really excited for the upcoming years,” Long said.