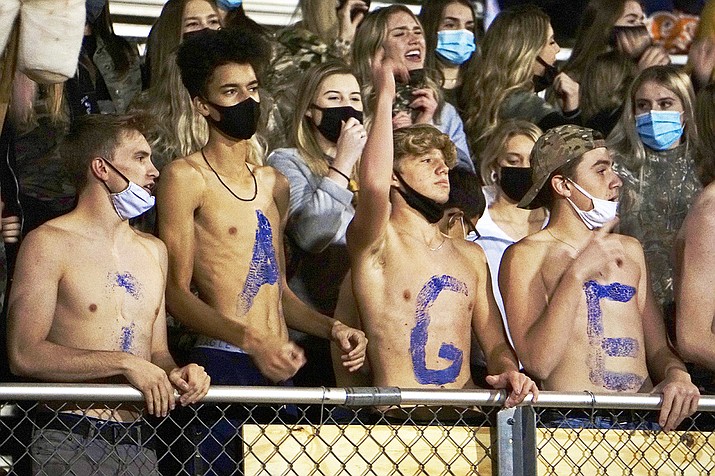 Prescott football fans cheer on the Badgers in a cross-town rivalry game with Bradshaw Mountain on Friday, Nov. 6, 2020, in Prescott Valley. (Aaron Valdez/Courier)

Who: Mingus Marauders at #15 Prescott Badgers

Tickets: Due to COVID-19 restrictions, only 25% capacity of Bill Shepard Field will be filled for Friday’s home game. Tickets can be purchased only online at prescottbadgers.com/event-tickets. No tickets at the gate will be sold.

Last Week: Prescott — Running back Nathan Wright ran 20 times for 267 yards and three touchdowns in a 32-10 win over cross-town rival Bradshaw Mountain in Prescott Valley. Super-sophomore Cody Leopold had a good night on the ground as well, racking up 132 yards on 24 carries and two scores. Prescott ran for more than 400 yards in the win over the Bears; Mingus — Despite taking a 21-14 lead at halftime, the Marauders surrendered 21 unanswered points in the second half in a 35-21 loss to the region’s only unbeaten team, Coconino. Andrew Meyer had 28 carries for 138 yards, while Jonathan Sanchez and Zachary Harrison each had a touchdown.

The Setting: The Badger defense doesn’t face much of a threat in the air from Mingus so look for their focus to be stopping the Marauders’ ground game, which features the two-headed monster of Andrew Meyer and Jonathan Sanchez. Meyer has 112 carries for 602 yards and five touchdowns this season, giving him a tick over 100 yards per game in 2020. Sanchez has scored nine touchdowns on the ground this season.

Playoff Watch: Prescott currently sits at No. 15 in the AIA power point rankings. No. 1-ranked Casa Grande will likely be taken into the open division playoff, which leaves No. 2 Mesquite all the way through No. 17 Lee Williams to play a 16-team play-in round for the right to head to the 4A state playoffs. The Badgers must beat Mingus on Friday night and hope to stay in the Top 16 for a chance at the play-in round. If they don’t qualify, Prescott will play Vista Grande on Friday, Nov. 20, as an eighth game to end the season. The AIA allowed teams to schedule an eighth game if they didn’t make state due to COVID-19 and a shortened season.