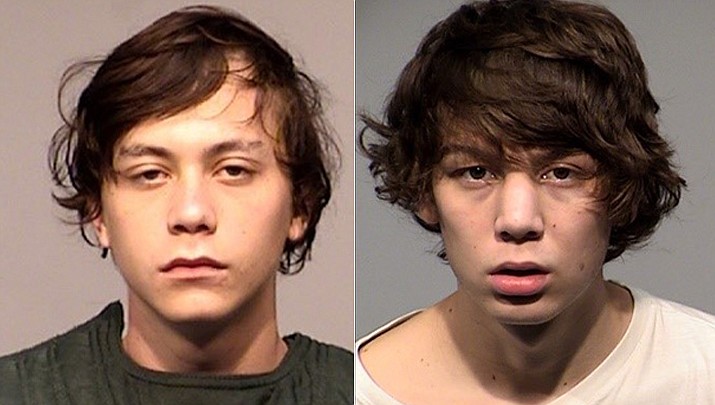 On Oct. 20, Prescott Valley Police Officers (PVPD) and detectives were called to a home where a 14-year-old girl died of an overdose involving suspected counterfeit pills containing fentanyl.

PVPD Detectives notified the Partners Against Narcotics Trafficking (PANT) task force and detectives arrived to assist in identifying those who provided the pills to the victim in consideration of possible prosecution.

Working with PVPD detectives, PANT detectives obtained additional information from multiple community sources of people likely involved in the narcotic supply chain, along with social media activity all identifying several juveniles, including 18-year-old Aaron Lundsford Schmit of Prescott, according to a news release from the Yavapai County Sheriff’s Office. Tracking the evidence and sources, detectives learned that Lundsford Schmit and some of the juveniles named were likely responsible in providing fentanyl-laced pills to the 14-year-old victim.

Based on the information that pills supplied to the 14-year-old may have come from this group, detectives found and reviewed social media posts showing Lundsford Schmit offering to sell THC candy ropes and several blue oval pills consistent with mimic pills that commonly contain fentanyl.

The particular post of concern was dated one day prior to the death of the 14-year-old.

Additionally, the investigation at the victim’s home led to PANT detectives to identifying and detaining a female juvenile from a nearby school on drug charges the same day.

This juvenile was associated with Lundsford Schmit, according to multiple sources. The juvenile was transported to the Juvenile Detention Center in Prescott and remains in custody.

Over the next few days following the overdose, PANT detectives discovered an apartment on Valley Street in Prescott associated with Lundsford Schmit along with a gold Mercedes vehicle. The vehicle was later located in Prescott Valley and, during a traffic stop on Oct. 26, 18-year-old Christopher Munsey of Prescott Valley and two juveniles were detained.

Munsey was in possession of THC rope candy, marijuana, $250 in cash, and plastic “bindle bags” used in drug sales. Munsey was booked on charges of possession of a controlled substance and possession of paraphernalia. He was later released and arrested again within days by Prescott Valley Police on unrelated drug charges. He now remains in custody on no bond.

The juveniles were interviewed and released pending further investigation.

The effort by PANT detectives continued with a search warrant obtained for the apartment on Valley Street in Prescott. Just before 10 p.m. on Oct. 26, the warrant was served.

These items were within reach of several children ages 11, 5, and 4 who were present at the time. Lundsford Schmit refused to discuss his activities and connection to the overdose. He was arrested and booked into the Yavapai County jail in Camp Verde on charges of possession of a narcotic drug, possession of drug paraphernalia and three counts of endangerment.

He has since been released following seven days time served. The Department of Children Safety was notified of the circumstances of the initial arrest.

PANT detectives continue working unabated investigating all leads seeking evidence connecting dealers selling dangerous drugs to our kids, some who will not survive, the YCSO reported.

If anyone has further information involving these suspects or others who may be involved in drug sales associated with overdose deaths, they are urged to call Yavapai Silent Witness at 800-932-3232.

A direct tip to Silent Witness resulting in the arrest of a verified fentanyl dealer will result in a reward of $1,000.