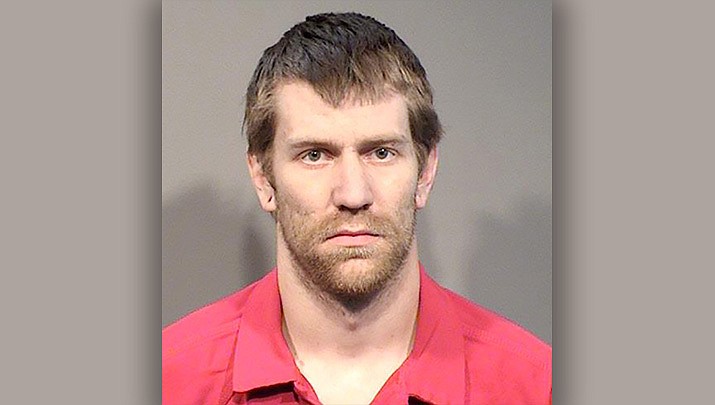 Jeffrey Richard Wagner, sentenced at Yavapai County Superior Court in Prescott, had pled guilty on Oct. 23 to two counts of possession of narcotic drugs for sale, including fentanyl and heroin, with one prior conviction of possession of drug paraphernalia, and misconduct involving weapons. (YCSO/Courtesy)

A 28-year-old Prescott Valley man late this past week was sentenced to 10 years of flat time in Arizona State Prison for selling the synthetic opioid fentanyl, the Yavapai County Attorney’s Office reported in an Oct. 30 news release.

Jeffrey Richard Wagner, sentenced at Yavapai County Superior Court in Prescott, had pled guilty on Oct. 23 to two counts of possession of narcotic drugs for sale, including fentanyl and heroin, with one prior conviction of possession of drug paraphernalia, and misconduct involving weapons.

Under a flat-time sentence, Wagner is ineligible for suspension, commutation of his sentence, probation, pardon, parole, work furlough or release until he serves his entire 10-year prison term.

Officials with Partners Against Narcotics Trafficking (PANT), which is Yavapai County’s multiagency drug task force, say that in recent months before May they began investigating Wagner’s possible drug activity.

Detectives say they had learned Wagner was driving to Phoenix to buy drugs and sell powder fentanyl, mimic M-30 pills laced with fentanyl, and heroin from his Prescott Valley residence.

PANT officers added that they found items associated with drug sales, including multiple surveillance cameras mounted inside and outside of the residence, a pill press, bindles for packaging, and cash.

Officers also confiscated a handgun, a rifle and a 12-gauge shotgun, which had been reported stolen, and “a large quantity of rounds,” the release stated.

“Kudos to PANT for their hard work every day to take these fentanyl dealers off our streets,” Yavapai County Attorney Sheila Polk added in the release. “Meanwhile, the public needs to understand that fentanyl is deadly; one pill is literally enough to kill. I ask everyone to help spread the word and keep our loved ones safe.”

On May 1, PANT officers arrested Wagner at an apartment in the 4800 block of North Robert Road, along with two other suspects, including Ashleigh Olivas, 23, and Shelbie Fromm, 27.

The Yavapai County Sheriff’s Office (YCSO) stated in a news release on May 7 that PANT officers found Wagner and Olivas in possession of a pill press with fentanyl residue, as well as saleable quantities of methamphetamine, fentanyl and heroin.

PANT officers say they also found a stolen shotgun from Prescott Valley with Wagner, as aforementioned. Fromm had been in possession of drug paraphernalia while on felony release, YCSO officials added.

Olivas and Fromm had been held without bond at the time of their arrests, but Wagner was on a bond of $125,000, PANT reported.