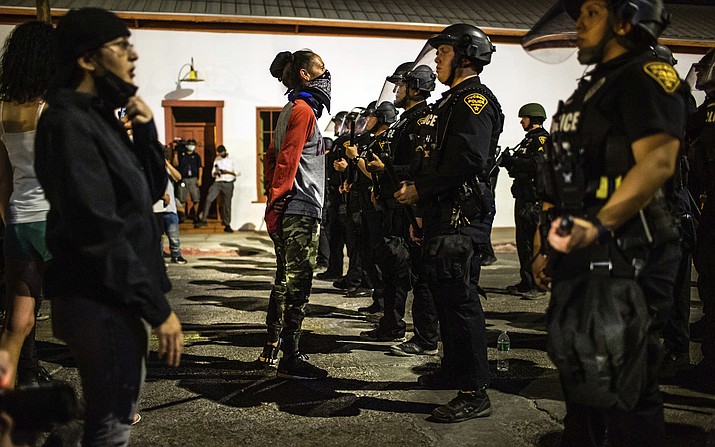 In this Friday, May 29, 2020, photo, protesters stand off against a line of officers from the Tucson Police Department at Cushing Street and Church Avenue in Tucson, Ariz. The protest in Tucson was similar to those in numerous cities across the United States following George Floyd's death while in custody of the Minneapolis police in Minnesota earlier this week. (Josh Galemore/Arizona Daily Star via AP) 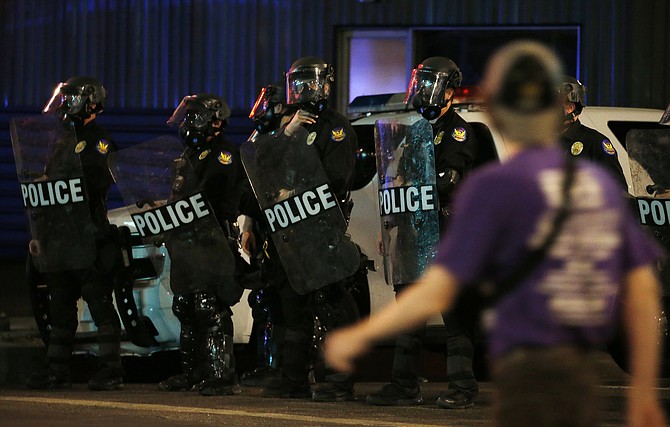 Phoenix Police keep protesters away from Phoenix Police Headquarters Saturday, May 30, in Phoenix, protesting the death of George Floyd, a handcuffed black man who died in police custody with much of the arrest captured on video of a Minneapolis police officer kneeling on the neck of Floyd. (Ross D. Franklin/AP)

PHOENIX -- Saying he needs to act because of "lawlessness,'' Gov. Doug Ducey has imposed an 8 p.m. statewide curfew for one week.

The governor said that the incident in Minneapolis that resulted in the death of George Floyd at the hands of police "tragic and abhorrent.''

"It should be condemned by leaders at all levels,'' he said. But Ducey, following disturbances in several Arizona cities, said even before he issued his curfew order Sunday afternoon that he finds those actions unacceptable.

"The looting and violence we saw last night, especially in Scottsdale, simply cannot be tolerated,'' he said.

"And it won't be,'' he continued. "Destruction of property does not qualify as freedom of expression.''

His new order, issued Sunday, puts those words into action, starting with the curfew.

The order bans individuals from "using, sitting, standing, sitting traveling or being present on any public street or in any public place, including for the purpose of travel. It runs through 5 a.m. each night, through Monday, June 8.

And by "public place,'' the governor said it means "any place, whether on privately or publicly owned property, accessible to the general public.'' That specifically includes public streets, alleys, highways, driveways, sidewalks, parks, vacant lots and any "unsupervised property.''

The order was taken under the same laws which Ducey said gave him the authority to issue a "stay-at-home'' order and restrict business operations due to COVID-19. Violations are a Class 1 misdemeanor, carrying up to six months in jail and a $2,500 fine -- aside from any other charges that might be leveled against those arrested.

But there are broad exceptions, including for people going directly to and from work, attending religious services, trucking and delivery services and caring for a family member, friend or animal.

And there are several large loopholes, including patronizing or operating private businesses and "obtaining food.''

"If you're going to Jack in the Box, you can go out,'' acknowledged gubernatorial press aide Patrick Ptak. He said this is not a loophole for people to use who really want to cause disturbances.

"The weren't going to the Jack in the Box,'' he continued. "There was looting, rioting going on around Scottsdale.''

He said the governor's order is designed to "proactively prevent that tonight.''

In issuing the order, Ducey said in a Twitter post that it "gives law enforcement an additional tool to prevent the lawlessness we have seen here and in cities nationwide.''

"Police will be equipped to make arrests of individuals who are planning to riot, loot or cause damage and unrest,'' the governor said.

Ptak echoed that theme, citing in particular the looting and damage caused Saturday at Scottsdale Fashion Square mall and nearby businesses. Police said 12 were arrested.

That followed disturbances in Phoenix on Saturday during which police arrested 114.

"Now law enforcement has a tool to address that,'' he said. "And it's also a message that we don't want to see that again.''

The move comes amid protests in Arizona and elsewhere against police brutality, sparked most recently by the death of George Floyd who was killed under the knee of a Minneapolis police officer on Monday. The disturbances that started in that city have spread nationwide, including to several Arizona cities.

What appears to have gotten the governor's attention is after Scottsdale police said "millions of damages and theft'' occurred in violence and looting Saturday at the Fashion Square mall and nearby businesses. Police said 12 were arrested.

And 114 were arrested in Phoenix during protests on Saturday.

The governor said he was acting "at the request of local leaders and in coordination with state and local law enforcement.''

But Nate Sigal, aide to Tucson Mayor Regina Romero, said there had been "no contact'' between the governor and either her or the police chief.

"The governor did call the chief yesterday (Saturday) morning,'' Sigal said. "My understanding is that call was sort of a general check-in

And the Arizona Republic reported that Phoenix Mayor Kate Gallego was not among those who requested the curfew, quoting aide Annie DeGraw.

"We have not spoken to or heard from the governor on this or any other topic in a number of months,'' DeGraw said.

"We talked with mayors, including of our largest cities,'' he said. "This is action that was supported throughout those conversations, including whether it would happen statewide or at the local level.''

Anyway, Ptak said, the governor had "absolutely heard'' that if he had not done this on a statewide basis "it likely would have been done on a city-by-city basis.''

That, however, raises the question of why a problem that exists in a few urban areas should lead to a statewide curfew in all 91 cities and towns and all 15 counties.

"From what we've heard, there is a need for this statewide,'' Ptak said. And, if nothing else, he said that having a curfew would ensure "we're using law enforcement resources the most effectively.''

"And that includes consolidated resources around the state where they can be most useful,'' Ptak said.

Ducey also has authorized an "expanded National Guard mobilization'' to deal with the protests. Guard soldiers already have been placed on duty to deal with the COVID-19 outbreak, providing support services ranging from delivery of groceries to helping set up emergency medical facilities.

Ptak said soldiers would be in a support role, providing vehicles, barriers and other kinds of preparation "in coordination with what local law enforcement needs.''

The measure drew criticism from Victoria Lopez, advocacy and legal director of the American Civil Liberties Union of Arizona. She said such an "extraordinary and sweeping measure ... raises serious constitutional concerns.''

"Such actions restrict the rights of protesters and will undoubtedly lead to selective enforcement in Black and Brown communities,'' she said in a prepared statement. "We urge the governor and other elected officials across the state to seek a less restrictive approach and to meaningfully engage community leaders to address longstanding concerns with racist policing practices."

Asked about racism among police in Arizona, Ptak said Ducey believes there is a "need for dialog.''

He said the governor would be meeting Sunday afternoon with pastors and other community leaders "to continue that dialog."

As part of the state of emergency, a limited curfew is imposed for the entire state beginning at 8 p.m. Sunday, May 31. The curfew is from 8 p.m. to 5 a.m. the next morning.

The order will expire Monday, June 8, at 5 a.m. "unless further extended."

During the hours of curfew, all persons are prohibited from using, standing, sitting, traveling or being present on any public street or in any public place, including for the purpose of travel, with the following exemptions:

For more, watch The Daily Courier and dCourier.com.