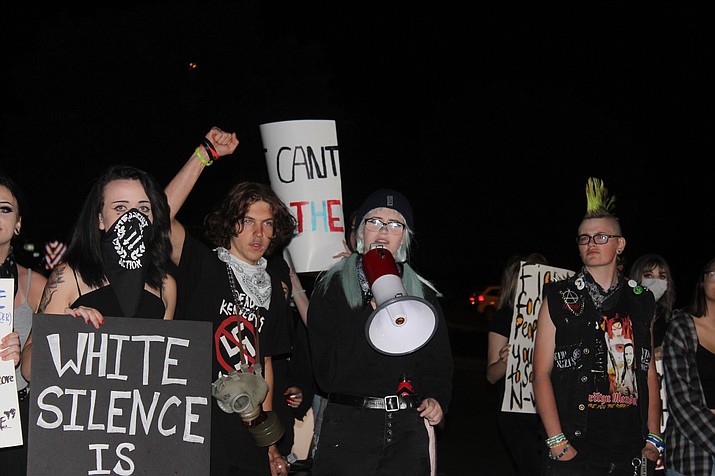 Protestors line the sidewalks outside the Prescott Valley Police Department on Saturday, May 30, 2020. (Courtesy) 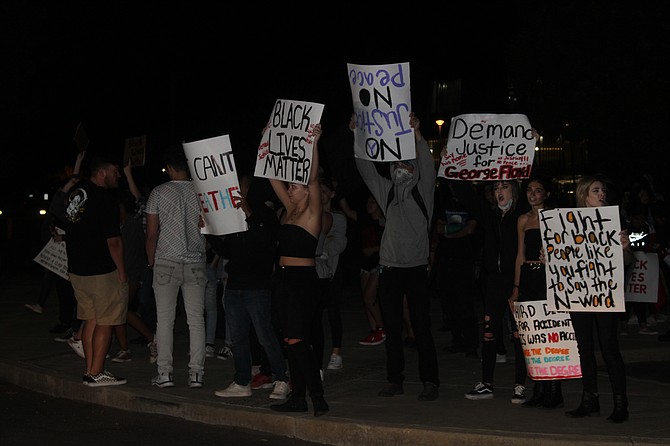 Protestors line the sidewalks outside the Prescott Valley Police Department on Saturday, May 30, 2020. (Courtesy)

More than 150 protestors gathered in front of the Prescott Valley Police Department headquarters Saturday night to join nationwide protests due to the death of George Floyd in Minnesota earlier this week.

Four Minneapolis, Minnesota, officers were fired after Floyd, an unarmed black man, died in their custody May 25.

Former officer Derek Chauvin, the man who put his knee on Floyd’s neck during the arrest for 8 minutes and 46 seconds in total, was arrested and charged with third-degree murder and second-degree manslaughter.

Prescott Valley officers could be seen on social media video lined up in front of their headquarters in the parking lot, and standing side-by-side with protestors simply talking.

Prescott Valley Police spokesperson Jerry Ferguson said that two individual groups were present Saturday night, the first to protest the unreasonable force used by law enforcement throughout the country during various events and incidents, including the Floyd incident.

The other group was supporting law enforcement in general.

Deputies with the Yavapai County Sheriff’s Office and officers with the Prescott Police Department were on scene as well to help manage the crowd.

“Several arguments escalated into minor fights throughout the event; however, no one was injured. The remaining group peacefully left the area around midnight. We are pleased to say there were no reported injuries and no damage that occurred during this event,” Ferguson said.

“Our officers are highly trained professionals who deserve respect from everyone they serve. Why? Because we truly respect the rights of everyone and are simply trying our best to keep the community safe from all. We will not tolerate violence towards anyone, nor will we allow people to violate the laws of our country, state, and community,” Roser said in a statement. “Those who wish to protest have that right to do so peacefully; however, they do not have the right to infringe on peace and tranquility of our beautiful town or neighbors.”

Roser continued, “The Prescott Valley Police Department is asking that if you wish to protest, please do so respectfully and peacefully. Do not confront those with differing views than yourself. Understand that we are not the same; each of us has different views and positions. This is the beauty of a diverse and peaceful community. We respect your right to speak peacefully and want to thank you all for speaking your mind without causing concerns for others.”

Arizona Gov. Doug Ducey issued a statement Sunday commending the work of law enforcement officers across the state for their work in protecting major targets, including those in downtown Phoenix and Scottsdale this weekend.

“Now, more needs to be done, in more places around the state, to protect law and order and public safety. The looting and violence we saw last night, especially in Scottsdale, simply cannot be tolerated. And it won't be,” Ducey said. “Destruction of property does not qualify as freedom of expression. I will be speaking with mayors around the state throughout the day to ensure plans are in place to prevent this kind of lawlessness tonight and beyond.”

With that, Ducey issued a statewide curfew beginning at 8 p.m. Sunday night. The curfew will be in effect for one week.

“This gives law enforcement an additional tool to prevent the lawlessness we’ve seen here and in cities nationwide,” Ducey said in a tweet about the curfew. “Police will be equipped to make arrests of individuals who are planning to riot, loot or cause damage and unrest.”