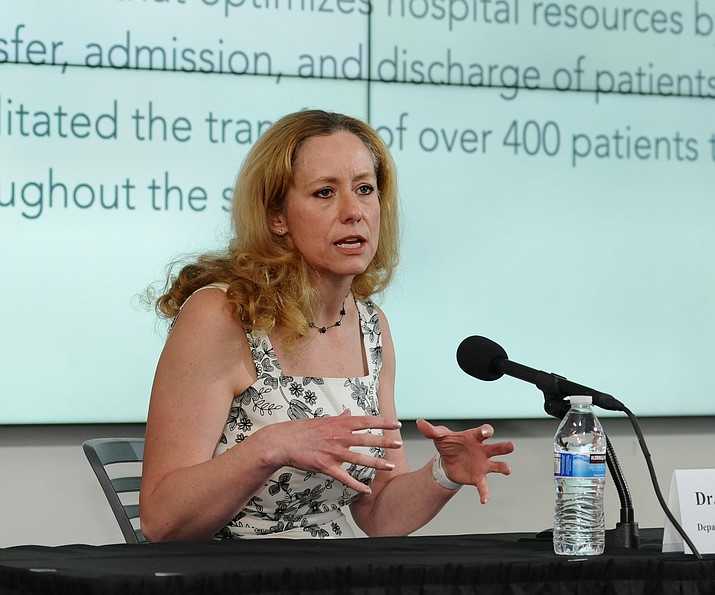 State Health Director Dr. Cara Christ explains her belief that the benefits of getting students back in school outweigh their risks of the spread of COVID-19. (Howard Fischer/Capitol Media Services)

PHOENIX — Gov. Doug Ducey may be ready to send kids back into the classroom as soon as this week, but many Arizonans do not share his views.

A new survey shows just 52% of those questioned said they would allow children to go back to school even though the governor allowed his stay-at-home order to expire earlier this month.

In fact, the findings by HighGround, a political consulting firm, found that only 29.5% said they would definitely permit kids to go to school, with the balance of that 52% in the “probably yes” category.

More significantly, nearly one out of every five people surveyed, who actually have children in school, said they would definitely not be putting their kids into seats.

The effects on the children aside, that could devastate the finances of schools as the state aid they get depends on attendance. It was only a special provision in state law this year that kept the funds coming, at the same regular rate, for students who were being taught at home.

On the other side of the equation, if 20% of children don’t show up, that could make social distancing a bit easier. The governor has called for schools to reopen in August, regardless, as well as for summer school as soon as this week.

The survey comes as the state schools chief, Kathy Hoffman, is scheduled to release some guidance and protocols on Monday, June 1, about what are the best practices to reopen schools.

Hoffman, in a statement to Capitol Media Services, acknowledged that there is some hesitation among parents. And that, she said, puts the burden on schools.

“Arizona Department of Education urges over-communication with parents and families, as well as including them in the process as schools develop their plans,’’ Hoffman said. “When parents know what the plans are and can provide input, they’re more likely to be assured regarding health and safety issues.’’

Hoffman said schools need to take the lead “with the utmost empathy and flexibility.’’ But she said that things “will look different than those of previous years.’’

Pollster Paul Bentz said the guidance that Hoffman provides and what school officials tell parents could have a huge effect. He pointed out that fully 14% of the 400 people surveyed said they did not know whether kids should be back in school.

By contrast, Bentz said, people had more definite views, whether pro or con, about other activities. For example, fewer than 2% of people have no views about whether they’re willing to go to a movie. And the “don’t know’’ figure for dine-in restaurants was just one-half of a percent.

“The clarity that they (schools) can provide on what the protocols are going to be is critically important because that’s a movable audience,’’ he said.

Chuck Essigs, lobbyist for the Arizona Association of School Business Officials, said he expects that attendance on the first day of school will be low. Essigs said a lot of parents are likely to take a wait-and-see attitude to decide if they feel safe about conditions.

And even if parents do decide that school is safe, there are more practical concerns.

He said if schools are supposed to be complying with social distance requirements, that means districts can’t put buses full of children on the road. So that, Essigs said, could mean having three times the number of bus runs to transport the same number of children.

Bentz said the feelings about sending children to school relate directly to their level of concern about the virus — and the economy.

He said there is a definite correlation between those who believe the governor is moving too fast in reopening the state and those who do not think school is a safe option. He also said that those most worried about the push to get back to normal despite the ongoing outbreak tend to be younger.

“Voters in the 50 to 64 range were much more likely and much more desirous to get the state open and get the economy moving,’’ Bentz said. He said the likely reason for that is pure economics.

“Those folks are often 10 years or less away from retirement and are looking at their 401(k) and looking at their long-term economic growth and want to make sure they’ve got something to retire to,’’

And then there’s the politics of it all.

Bentz said that half of Republicans questioned believe that Ducey’s efforts are proceeding at just the right pace, with nearly a third saying he is going too slow.

Among Democrats, however, only one-fourth find Ducey’s plans to be appropriate, with nearly 70% saying he’s moving too fast.

“Some of these folks are not going to be satisfied with anything that’s being done to reopen, and that’s from the Left, in the same manner that, on the Right, that there’s about 30% of Republicans that think everything is happening way too slow,’’ Bentz said.

In fact, he said, a majority of Republicans are willing to do pretty much anything now like dining out, bars and movie theaters.

“But the rest of the electorate is much more cautious of those large public gatherings,’’ Bentz said.

The live telephone survey using a combination of landlines and cell phone was conducted between April 18 and April 22 of likely Arizona voters, those who have a history of participating in prior elections. It has a margin of error of 4.9%. 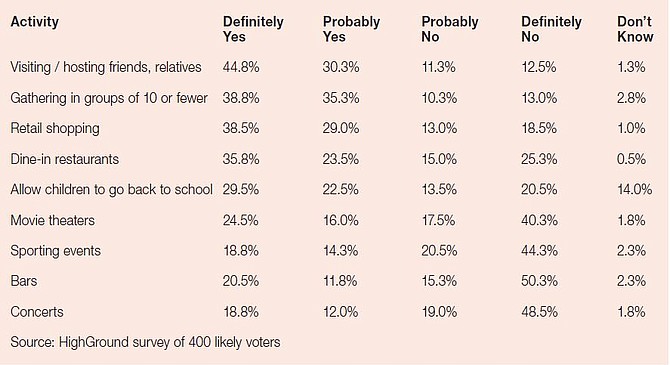