Prescott rodeo will go on!
Whether it will have fans or how many in stands is next question 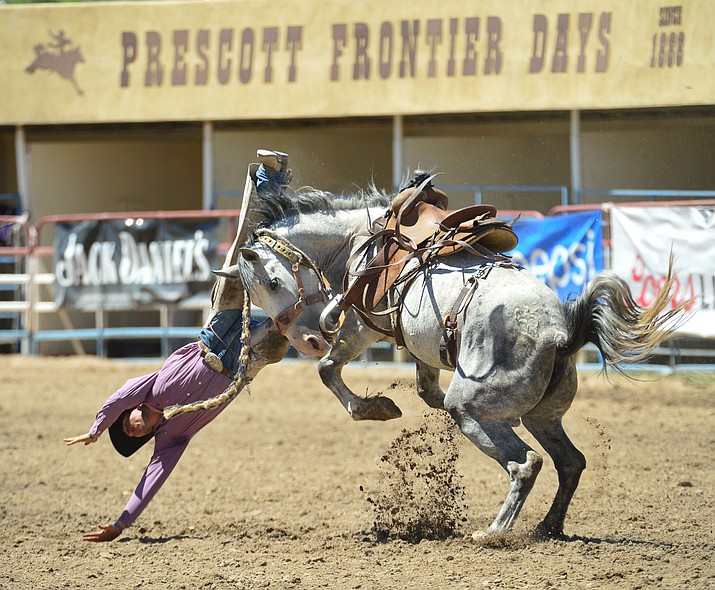 Ty Smith gets dashboarded by Catclaw in the Cowpunchers Bronc Riding during the 6th performance of the Prescott Frontier Days Rodeo Saturday afternoon July 6, 2019. (Les Stukenberg/Courier)

The “World’s Oldest Rodeo” can take place as scheduled this summer despite the COVID-19 restrictions.

“The cowboys and the bulls can get ready,” Gov. Doug Ducey said Thursday, May 28.

But the governor said he’s not prepared to say just yet whether there will be anyone in the stands to watch the competitors.

“There will be more to follow on that,” Ducey said in response to questions of exactly what the event will look like for what is scheduled to be its 133rd annual performances June 29 through July 5.

“You’re talking about light years away in the world that we’re living in and the change that we’ve seen in the state of Arizona week to week,” Ducey said.

J.C. Trujillo, general manager of Prescott Frontier Days, told Capitol Media Services he’s planning for an audience, albeit one much smaller than normal. And that, he said, will mean the organization will be taking in less money.

Trujillo acknowledged that the final decision on who gets to watch the event live ultimately may not be his, what with whatever restrictions the state imposes on crowds. But even if there’s no one to watch, he said it will go on.

The issue, he said, is maintaining the event’s status. “For 132 years here in Prescott, over a hundred years we’ve been at the same rodeo grounds, we’ve had a rodeo,’’ Trujillo explained.

Aside from being “a way of life,’’ Trujillo said the event has become one of the Top 30 rodeos in the country as measured by dollars.

And many of those dollars — Trujillo said between $300,000 and $400,000 — come from people attending the eight performances over seven days starting on the evening of June 29.

The question of what will happen in Prescott this summer is not an idle one.

On Thursday, city and state officials in Cheyenne, Wyoming, announced that Frontier Days there was being canceled due to the pandemic. The Associated Press said this is the first time that the event, billed as the world’s largest outdoor rodeo, has been called off in its 124-year history.

Ducey’s go-ahead means the Prescott event won’t face the same fate. But Trujillo said even if the governor allows spectators, it won’t be the same as in prior years.

For example, he said, there usually are “skyboxes’’ that seat 400 people in covered stadium-type seats.

“But this year, with the virus and everything going, I canceled that order,’’ Trujillo said.

All that has financial implications.

“That’s 400 high-dollar tickets that we are going to do without,’’ he said.

The grandstands also will be different, Trujillo said.

Rather than assigning specific seats, ticket holders will be entitled to sit in designated sections.

“And we’re only going to sell about 60 percent of that section,’’ he said, allowing groups that come together to sit together but providing sufficient space between them to meet any social distancing requirements.

At the same time, Trujillo said his organization does not charge entry fees for the participants.

Trujillo said he is counting on national and local sponsors to stay with the organization.

And there’s something else: Trujillo said The Cowboy Channel will televise all eight performances, though he did not discuss what financial arrangements are being made for that.

Finally, Trujillo said there have been record-breaking crowds at Frontier Days for the past few years.

“Luckily, we have been able to put some money aside for a rainy day -- or a virus day,’’ he said. “And that’s exactly what has happened here.’’