Gov. Ducey: Schools to reopen, regardless 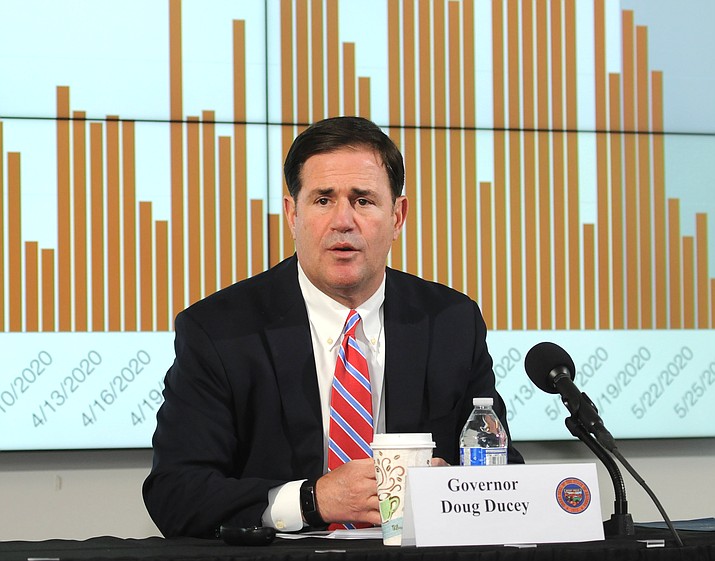 PHOENIX — Arizona schools will reopen late this summer, pretty much no matter what is going on with COVID-19, Gov. Doug Ducey said Thursday, May 28.

And there could be summer school — and even the opening of schools that operate on a year-round basis — even earlier than that.

The governor and Cara Christ, state health director, acknowledged the risk of having children together in classrooms. That’s why schools were shuttered on March 15.

But Christ said it isn’t that simple. “There’s a lot of public health reasons why we would want kids in school,” she said. “They provide a lot more services than just education.”

Still, she conceded, it is a bit of a balancing test.

“Schools provide nutrition, they provide safe environments, they provide physical activity,” Christ said. “All of this is important for the ongoing health of these kids, especially as they grow.”

That, she said, requires looking at it “from a holistic public health approach.”

“We are weighing it against the risk of transmission of the virus and that’s one of the things we’re taking into account,” Christ said. That includes “flexibility” to provide alternatives to students — and faculty — who may themselves be at risk or have family members and finding ways to keep them safe “while we’re still meeting the needs of the children.”

Anyway, she said, there are ways to reduce risks, ranging from more frequent disinfection of surfaces to not having students gather for assemblies and lunches.

Ducey defended the decision to make that announcement about August reopenings on Thursday, even with the state still in what the Centers for Disease Control and Prevention calls Phase 1. That is the earliest stage of reopening both the economy and public activity, which involves not just social distancing but also prohibits gatherings of more than 10 in any one place.

“We need parents and teachers and superintendents to be prepared,” he said of the announcement.

Some of the details of how this all will work will come next week. State schools chief Kathy Hoffman on Thursday promised to issue “guidance to serve as a roadmap for preparing for a variety of learning options that keep students and teachers safe.”

“This documents ... will provide adaptable, flexible recommendations, considerations and resources for districts and charters to plan for the upcoming year,” Hoffman said.

Public schools aside, the governor gave the go-ahead for summer camps to open as early as this coming week.

That, however, is for the moment going to be limited to day camps. And they will have to operate under guidelines to be issued by the state.

And the governor also announced that youth sports can return immediately.

But here, too, it won’t look the same as before.

Christ said there will be definite limits on the number of parents and spectators who will be able to go to games. And she said there will be other changes, like cleaning commonly used equipment between players, no hanging around before or after the games, and requiring adults to wear masks where possible.

Separately, the governor said that Prescott Frontier Days, the “World’s Oldest Rodeo,” will be able to continue, uninterrupted, for the 133rd year, allowing it to keep its record as the world’s oldest rodeo. But Ducey said the question of whether anyone will be allowed in the stands to watch remains undecided.

The announcements came as the governor acknowledged that there has been an upward tick in the percent of COVID-19 tests that are coming back positive. It went from 5.1% for the period ending May 10 to 6% a week after that, and 6.8% for the most recent week.

Still, Ducey said he remains optimistic. “If you look at this chart you can possibly see the beginning of a downward trend,” Ducey said.

“The trend is not here yet,” the governor conceded. And then there’s the fact that it can take up to seven days for the state to get complete numbers from laboratories.

“This is something that we’ll continue to monitor,” he said.

The big announcement — and the big questions — all surround having students return to the classroom. Ducey said this decision is being made from “a public health perspective” as he referred questions to Christ.

“We know that we’ve had daycare and child care in place where kids have been in a congregate setting,” she said. And Christ said that, in discussions with school officials, they already are coming up with plans for how to deal with 1.1 million youngsters returning to classrooms.

Some of that, she said, is focused on children or teachers who are “at risk,” providing for distance or “virtual” learning.

Also key, Christ said, are smaller class sizes and disinfecting protocols “and a lot of safety things put into place.”

But Christ said she also looks at the issue as a mother of three elementary school children. “It’s important to get these children back into school, back into a normal routine,” she said.

Still, Christ acknowledged, it’s “going to be a new normal,” with more frequent hand washing, physical distancing and even not mixing at lunch or having large assemblies.

That, however, gets into the question of cost.

“That was definitely a part of the discussion that we had with superintendents, what were the needs of the schools, how would we work on flexibility for people with that underlying health condition, and what the cost would be,” Ducey said.

The governor said that there is money in the state budget as well as about $1 billion in Arizona’s “rainy-day fund.” On top of that, Ducey said the federal government is providing coronavirus relief dollars for education.

“So we do have some options,” he said. “And we’ll want to make the proper decisions so that we can successfully reopen our schools in a safe way for our kids, their teachers, the staff and the employees,” he said.

Gov. Ducey discusses best protection practices in light of virus
Ducey moves to appeal court order that would reopen gyms
Governor looks to ‘reopen’ state May 1, will make decision himself
Ducey lists 'essential services' for Arizona in wake of coronavirus
Gov. Ducey to provide roadmap for gyms, movie theaters and some bars to reopen amid COVID-19
Event Calendar