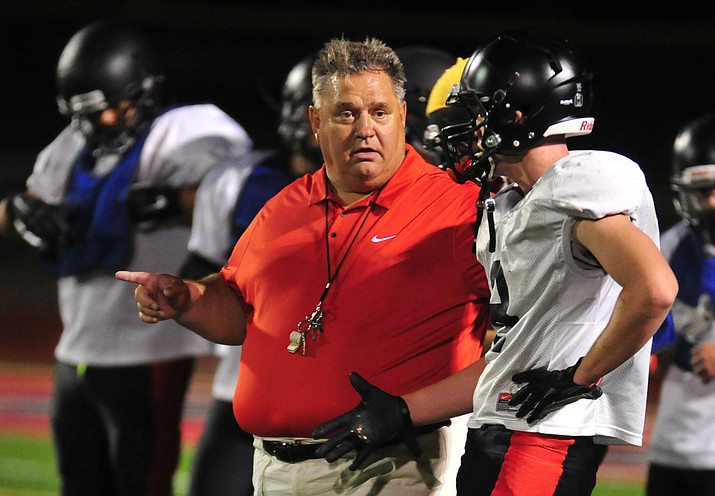 “It is with great sadness that the Humboldt Unified School District reports that they have lost a member of their family. HUSD received notice of the unexpected passing of coach Chuck Moeller, varsity football coach at Bradshaw Mountain High School over the weekend,” Lee said in an email Tuesday morning.

Moller reportedly died early Monday morning and was found in his home in Prescott Valley. The cause of death is unknown.

Bradshaw Mountain Principal Kort Miner said the school was “lucky” to have Moller on staff.

"What I will remember best was during the first week he was hired, he walked into Mrs. Goligoski’s (BMHS assistant principal) office and asked for a grade report on all of his athletes. When he received the large list, he said ‘This will change.’ And it did,” Miner recalled. “He always put academics and the character of his athletes first and I appreciated that. He was a team player, passionate about kids and purchased many lunches for kids out of his own pocket. His loud laugh and positive presence on campus will be missed.”

Originally from Eagle Bend, Minnesota, Moller had more than 30 years of coaching experience at every level of football from high school to professional.

He was an assistant coach for five National Coach of the Year winners, most notably Tyrone Willingham at Stanford (1997-2001) as an offensive line and tight ends coach in the 2000 Rose Bowl and under Les Miles at Oklahoma State (2001-2004).

Moller was named the head football coach of the Bears in May 2017 and compiled a 17-14 overall record in three seasons, including a seven-game winning streak in 2018 that saw Bradshaw Mountain start the season 7-0.

No further information was available on the details surrounding Moller’s death. Watch The Daily Courier and dCourier.com as more becomes available.