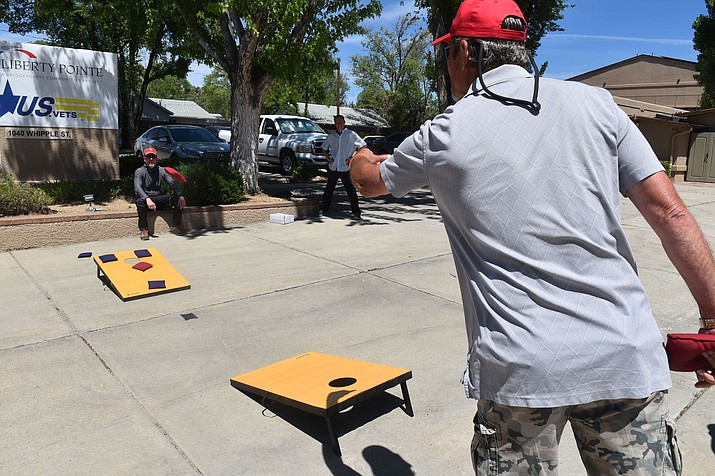 U.S. veteran Joe Trompeter tosses a bean bag in a cornhole game in front of the Liberty Pointe veterans center in Prescott on Friday, May 22, 2020. (Jesse Bertel/Courier)

On Memorial Day, the Prescott National Cemetery’s annual wreath-laying ceremony will be performed — but without an audience.

For area veterans, the ceremony to honor the fallen is sacred. But the COVID-19 virus knows nothing of tradition, remembrance or American memorials.

The U.S. Department of Veteran Affairs’ National Cemetery Administration announced last week its plans for the solemn remembrance that would pay tribute to fallen soldiers interred on their grounds but do so without public participation or the placement of flags at the gravesites.

Like in other national cemeteries across the nation, Prescott’s keepers of this sacred, park-like property off Highway 69 will perform the wreath-laying ceremony followed by a moment of silence and the playing of “Taps.”

“This year, by necessity, will be different from past Memorial Day observances,” VA Secretary Robert Wilkie said. “While the department can’t hold large public ceremonies, VA will still honor veterans and service members with the solemn dignity and respect they have earned through their service and sacrifice.”

The ceremonial aspects of the day, however, will be able to be viewed through social media, with livestreaming on Facebook and Twitter. The VA will enable people to pay tributes through the Veterans Legacy Memorial (VLM). This social media site contains a memorial page for each veteran and service member interred in a VA national cemetery.

U.S. VETS Prescott Executive Director Carole Benedict said her agency staff and veteran clients who have recently moved into a new 107-unit transitional and permanent house complex on Whipple Street — Liberty Pointe — will be observing the holiday with what they hope will be a time to honor and celebrate the role of the military in this nation’s history and every day existence.

Still following all the required health and safety protocols, and social distancing requirements, Benedict said the staff opted to organize an outdoor cornhole tournament and barbecue for their homeless and at-risk clients living on the premises. The cornhole game was a community donation. They, too, will conduct their first official flag-raising ceremony with the donations of a new pole and new American and POW/MIA flags.

The event will be just for their clients and staff, but will enable these veterans to participate in what has always been a celebration of American sacrifice for the greater good, she said.

“Raise the flag — will raise them for veterans. Do a little ceremony. Raise for first time at Liberty Pointe.

“We are still enforcing all COVID-19 protocols because as we’ve seen across the nation it’s hit congregate living facility very hard,” Benedict said. “We have very strict precautions so everyone stays well and healthy.”

Since March, Benedict said her agency has performed about 20 tests on both their clients and those who stay at the Coalition for Compassion and Justice emergency shelter on Madison Avenue. While awaiting results, those folks have remained isolated at local motels and so far there have been no positive cases.

Benedict said her agency, too, until just recently had halted intakes of clients. Now they are accepting applications but only after a 14-day quarantine. At this time, the agency has openings for 15 of its transitional beds and three studio apartments.

Given those precautions, however, Benedict said her staff brainstormed on how their veteran clients could observe Memorial Day, the sacred day also a kickoff of the summer season.

The outdoor-style event seemed like it was the most suitable, with the competitive game where players toss bean bags adding to what Benedict and her staff hope will be a festive atmosphere.

“It’s important to honor those who have fallen fighting for our country and our rights. A lot of civil liberties issues have come up during this whole pandemic.”

On Memorial Day, all Americans need to take a moment to say thank you to all veterans who have served, and those who died, for the sake of this nation’s precious way of life.

“Let them know how grateful we are that they are here for us,” she concluded.