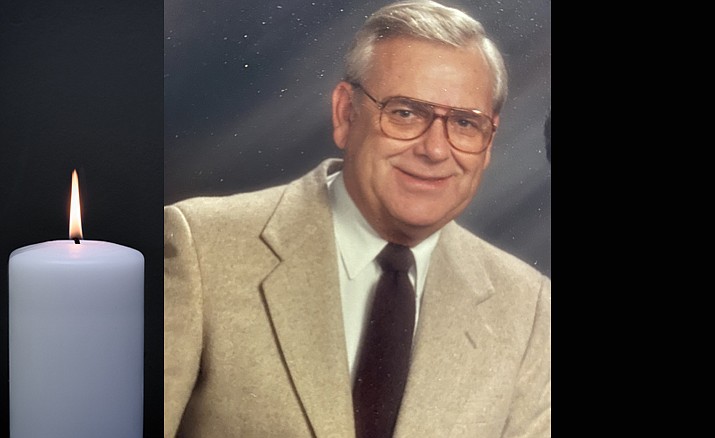 Gilbert Hedger, 90 of Prescott, Arizona passed away at home on May 6, 2020. Gilbert is survived by Joan his devoted wife of 64 years; his sons, Terry Hedger and his wife Clara of Seattle, Washington, Greg Hedger and his wife Diana of Redmond, Oregon and his daughter Kim Neel of Prescott Valley, Arizona. Gilbert also leaves behind 7 grandchildren and 6 great grandchildren.

Gilbert’s remains will be interred at St. Luke’s Episcopal Church. Memorial services celebrating his life will be scheduled at a later date, please contact St. Luke’s Episcopal Church for details. Gilbert was born September 22nd, 1929 to Jesse Franklin Hedger and Susie Wilson in Cleveland Ohio. A veteran of the Korean War serving in the Navy as a Chief Petty Officer, where he was decorated with the Air Medal with one gold Star, Korea, the U.N. Medal Presidential Unit, Fleet Commendation, Good Conduct and Combat Aircrewmans Wings with three Stars. He also was a member of the Royal Blue Nose. Gilbert received his Honorable Discharge August 1st, 1953. He then went on to serve as a Staff Sergeant in the Kentucky National Guard until, 1964. On January 20th 1956 he married the love of his life, Joan Schell in Franklin, Indiana. Gilbert moved his young family to Arizona in 1964 and while working full time for Motorola graduated from Arizona State University where he earned his Bachelor’s degree in Statistics and Electronic Data Processing. He worked as a Data Processing Manager in the Phoenix Arizona metropolitan area from 1970 until 1990 when he co-founded a Disaster Recovery Consulting business. Gilbert also served as President of the Data Processing Managers Association. He retired in 1995 and moved to Prescott Arizona with his wife Joan. He was a faithful servant of our Lord and served the Episcopal Church in multiple capacities. Gilbert is preceded in death by his brothers Sammy, Jay and Guy and his sisters Verna and Mabel.

Memorials may be given to the Episcopal Church, Wounded Warriors or the Epilepsy Foundation. The family wishes to extend our sincere thanks to Father Buisson and Deacon Christie and the congregation of St. Luke’s Episcopal Church from whom he drew great joy and comfort, to the Doctors and staff of the Prescott Veterans Administration Medical Center for their care, and all of his friends and neighbors who enriched his life and were enriched by him.