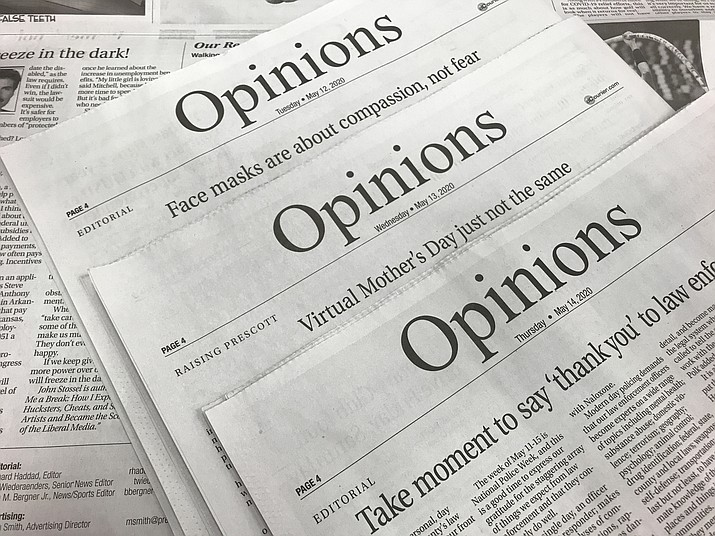 We recently received a message from a woman who was offended by one of the editorial cartoons that appeared on the Courier’s opinions page. As you can probably guess, it was a cartoon involving a political figure.

Our reply said, “We’re sorry if you were offended.” Then we explained that we try to allow a wide variety of opinions on the opinion page, whether they are letters, rants, raves, columns or cartoons from various artists. As you can imagine, it’s a constant challenge. By its very nature, the opinion page will never reflect a collective consensus.

Like this woman, people can be very passionate about their political opinions, but we feel it’s a good thing to allow people — even cartoonists — to express their passion on such a page. However, we also recognize that cartoons seem to carry a more potent level of satire. The inked images have proven to be a common cause for the politically engulfed person to take high offense. So a few years ago we started running two cartoons every day to make it as varied and balanced as possible.

The challenge we have is what people perceive based on what they are looking for.

Here are the two most common complaints we receive about our opinion page from overly politically focused readers:

1.) The Courier is a conservative Republican rag.

2.) The Courier is a liberal Democratic rag.

We’ll regularly receive complaints like these on the same day about the very same opinion page. The fact is, people generally find what they are looking for. And sadly, for some readers, they are looking to be offended.

There are even some people who go the extra obsessive step to count how many letters or cartoons favor or disfavor their political views. They somehow imagine that we deliberately hold back letters that would agree with their politics — be they liberal or conservative.

The truth is, we schedule letters to publish in the order they are received. We don’t take sides and we don’t deliberately publish more or less of one view or the other. We try to rotate guest and national columns so every other day there may be a voice from a different side of the aisle.

For those of you who so easily take offense and fall into this politically-obsessed category, please know that we mean no offense. We are simply allowing people to have a voice and express their opinions. It is, after all, an opinion page.

We also want such individuals to know we are much more than a single cartoon or a single letter on an opinion page. A lot of people here at the Courier work hard every day to cover and deliver local community news. That’s what matters most to us and that’s where we place the lion’s share of our efforts. With the exception of this editorial space or columns written by our local editors, we do not influence, censor or discriminate against the opinions on the opinion page. We respect people’s right to have an opinion. Some of us here have served in our nation’s military and in other ways to protect this right of free speech.

The politically obsessed who so easily take offense often bury themselves in a cocoon surrounded by only what fits their political appetite. They create a vacuum or echo chamber — closing their eyes and minds to any other perspectives and even vilifying anyone who might have alternate views. Some even inadvertently allow hate to incubate.

To those who fall into this category, we say there is more to life than politics, and there’s more to a community newspaper than an opinion page or an editorial cartoon. Our community and the pages of the Courier are filled with stories about local children, business people, seniors making a difference, athletes, ways to stay safe or healthy, and fun and worthy events. We’re sorry if you read the paper or judge your neighbor with your extreme Republican or Democratic glasses on. You might try taking them off more often. There is so much more to see, do, learn and feel.