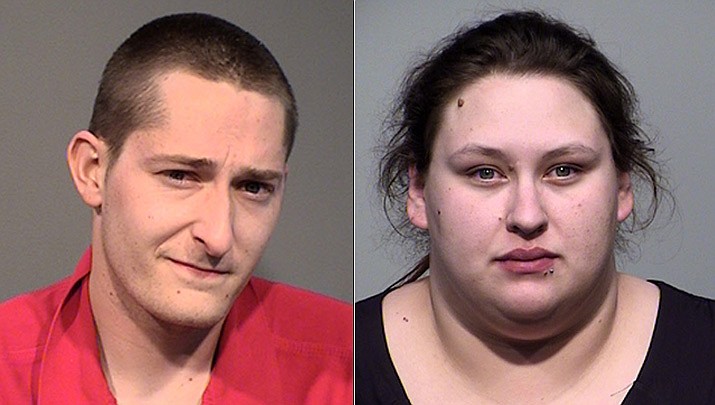 Justin and Amanda Horton face charges of transportation, sale, use and possession of drugs, according to a Yavapai County Sheriff’s news release. (PANT/Courtesy)

On Thursday, May 7, Partners Against Narcotics Trafficking (PANT) arrested a Prescott Valley couple — Justin and Amanda Horton — on charges of transportation, sale, use and possession of drugs, according to a Yavapai County Sheriff’s news release.

In addition, the couple was also charged with child abuse as their 3-year-old child was placed in protective custody following the arrest.

Over the past several weeks, the PANT taskforce received information that Justin, 27, was involved in the transportation, sales, use and possession of heroin. This information was gathered through multiple sources and it has been corroborated by independent investigation conducted by PANT detectives, the YCSO said.

During the first week of May, PANT detectives verified multiple sales of heroin by Justin in the Prescott Valley area. Detectives also discovered ongoing heroin sales in April involving Justin and, in at least one of the sales incidents, he had his 3-year-old child in the vehicle.

Upon entry, detectives announced their presence and a significant period passed with no response. Eventually, a small child was heard speaking inside the home. Officers found the child alone in a room and she was safely removed from the home. A short time later, Amanda Horton, 29, came out of a bedroom and was detained. Justin was in another room and was detained.

During a search of the residence, detectives found a methamphetamine bong, several new and un-used bindles (small baggies), snort tubes, black case holding a methamphetamine pipe, bindles of methamphetamine, a handgun, two rifles, marijuana, a digital scale, and burned heroin residue on a piece of foil. Detectives noted, according to the news release, that at least one firearm and many of the drug related items were accessible to the 3-year-old. The evidence gathered supported the sale and use of drugs by Justin and Amanda.

During follow-up interviews, Justin admitted he was involved in ongoing drug sales and admitted having his daughter with him on occasion. Amanda also acknowledged she used methamphetamine on occasion and that Justin was selling drugs.

A detective noted the following regarding concern for the child:

“It is very unsafe for a 3-year-old child to be in a home where she has access to dangerous and narcotic drugs and paraphernalia, as well as unsecured firearms. This is especially true if the child is unsupervised for any significant amount of time like we had observed while executing the search warrant. This environment poses a significant threat to the health and safety of the child. Along with that, the child was put in significant danger when she was accompanying Justin during drug transactions. It is common knowledge that drug transactions create volatile and dangerous environments, especially for a 3-year-old child.

“Based on these circumstances, the Department of Child Safety (DCS) was contacted and responded to the Prescott Valley Police Department where they conducted interviews with both parents. DCS informed us upon the completion of their interviews that they would be taking the child into temporary custody.”

Amanda Horton was charged with possession of dangerous drugs, possession of drug paraphernalia, child abuse, and endangerment as related to the child. She has been released pending final court disposition.