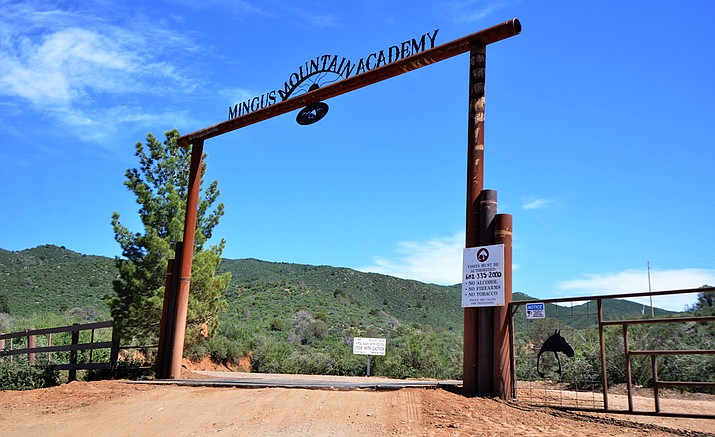 Driving the three-mile dusty dirt road near Mingus Mountain, you would never suspect you are nearing Yavapai County’s only coronarvirus hot zone.

“This outbreak is a serious one for Yavapai County, as we only had 90 cases prior to the beginning of this outbreak,” Farneti said, referring to the countywide total.

All the students at the school have been tested and some retested, explained Farneti. Some have tested negative. Yavapai Regional Medical Center conducted the testing of students on-site, she said.

Mingus Mountain Academy, which is located in Prescott National Forest between Jerome and Prescott Valley, was founded in 1985 on a 120-acre campus. 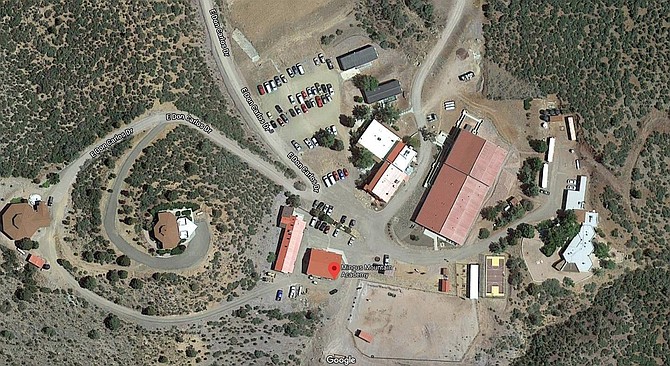 Mingus Mountain Academy is a private, all-girls alternative high school is located on a 120-acre campus surrounded by National Forest at the base of Mingus Mountain in Prescott Valley. (Google Earth)

Their group homes give students the opportunity to re-enter society living in nearby communities and getting part-time jobs while continuing treatment and education on campus, according to its website.

The school’s programs combine “relational engagement, caring staff, careful medical treatment, individualized psychotherapy and education, and numerous activities including our unique equestrian program.” Many students have “experienced significant trauma, according to their website.

The academy has a Nursing and Medical Department, as well as clinical services, Farneti said. They have an on-site nurse, and are consulting a local pediatrician.

“Initially two students showing symptoms were taken to the hospital to be tested. They were positive, but not hospitalized,” Farneti said. “As of the 60 tested after that, 40 were positive … last the school reported, only one was symptomatic … the rest were asymptomatic.”

But as more students began to become symptomatic, YCCHS contacted YRMC and the additional testing of all students took place May 8, she added.

Farneti said no students have needed hospitalization, and are being treated on campus and though telemedicine services.

“Due to the low occurrence of symptoms, low rate of complications and hospitalization among young people, this outbreak is not as serious at this point as one, in say, a nursing home or assisted living facility where vulnerable populations are in congregate living setting,” Farneti said.

Farneti said when the staff is tested, then the health department can trace their contacts in the community and recommend additional testing of household and community contacts.

Mingus Mountain Academy released a statement through the health department that read: “We have continued to take steps to mitigate the risks of the Coronavirus disease (COVID-19). Unfortunately, despite those efforts, we are currently addressing a cluster of cases on our campus. We are grateful that thus far no one is showing any severe symptoms of the disease. However, we are monitoring the situation closely, and students and staff with positive test results are currently in isolation and receiving the best care possible.

“Our program is following a stringent screening process for all individuals on our campus to confirm no one else is showing potential symptoms of this virus,” the statement read. “We also continue to keep our referral partners informed and are committed to taking whatever steps necessary to prevent further spread of this virus at Mingus.”

Some state media outlets and sources have suggested he Yavapai County Public Defender’s Office attempted to keep information related to the outbreak at the Mingus Mountain Academy secret.

Yavapai County Community Health Services Director Leslie Horton is adamant there was no such effort to hide the Mingus Mountain Academy outbreak. Rather the goal was to ascertain accurate information so as to be publicly responsible, she said.

“This was in no way intended to be withheld, or secret,” Horton said in an email message to the Courier on Thursday, May 14.

On April 30, Horton said, her department was notified by Yavapai Regional Medical Center of a possible outbreak at the youth residential treatment facility. YRMC staff was asked to conduct tests on 60 students after two were taken to the hospital with symptoms. They were not hospitalized.

A day later, she shared the information with Yavapai County judges because some of these students “have interaction with the local justice system, creating possibilities of exposure amongst our courts and attorneys,” Horton said.

At the same time, Horton said her staff was working with the academy to assure they were working to mitigate the spread as more positive results were confirmed. YCCHS was also working to assure the facility had adequate personal protection equipment and isolation efforts to protect against further infection of students, staff, and public.

Since the start of the COVID-19 spread in Yavapai County, Horton’s staff releases daily updates on the outbreak status without breaching federally protected confidentiality laws. In the case of Mingus Mountain Academy, Horton said the department again was taking strides to protect confidentiality yet dispense important public health information.

On May 4, YCCHS released the positive test results along with a statement from Mingus Mountain Academy after the information was properly verified, Horton said.

“This was not in any way influenced by the public defender’s office. This was a complicated and very sensitive situation. We did our best to allow the school to address the outbreak publicly, as we released the information publicly.

“This was and continues to be so drastically different due to extent of the outbreak, and within a congregate setting, due to the anonymity of the students, the protection of health information, the dealings within the criminal justice system, and the careful delivery of this sensitive information to the public.”

Mingus Mountain Academy’s public relations firm released a statement on Thursday stating that the facility continues to “monitor the situation closely, and students and employees with positive test results are currently in isolation and receiving the best care possible.”

“We wish them all a speedy recovery,” the release said, noting none of the infected state or students are suffering any severe symptoms.

“We are very appreciative of the ongoing support of our county public health officials who are working hard to obtain and administer the tests for the virus. Mingus is still following all public health and CDC guidelines for COVID-19 and ensuring all students and employees are maintaining social distance protocols. We also continue to keep our referral partners informed and are committed to taking whatever steps necessary to prevent further spread of this virus at Mingus.”