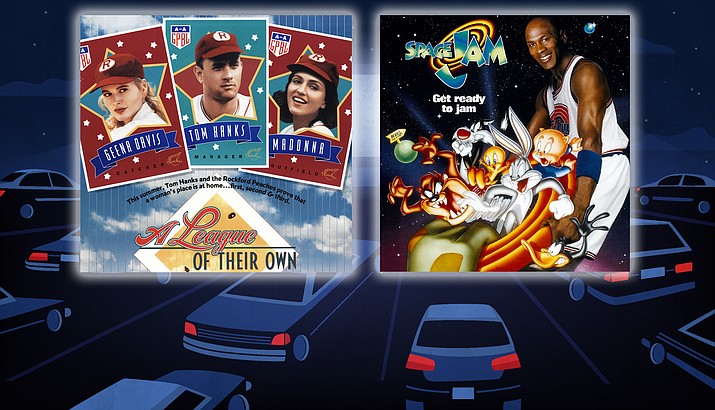 The Prescott Valley Arts & Culture Commission will present two free drive-in movies in the Findlay Toyota Center parking lot, 3201 N. Main St., at 7:45 p.m. Friday, May 29, and 7:45 p.m. Friday, June 5, to relieve stress tied to the COVID-19 pandemic. Findlay Toyota Center’s parking lot will open at 7 p.m. on both nights. Parking is limited, and spots are available only on a first-come, first-serve basis. (PNI illustration)

Findlay Toyota Center’s parking lot will open at 7 p.m. on both nights. Parking is limited, and spots are available only on a first-come, first-serve basis.

Watching a mirror-projected image on a giant, 50-foot inflatable screen from the comfort and safety of your vehicle, the first of the feature films, shown on May 29, will be “Space Jam,” Warner Bros.’ 1996 animated/live-action film featuring Bugs Bunny and NBA legend Michael Jordan.

“A League of Their Own,” a 1992 comedy about the Rockford (Illinois) Peaches women’s pro baseball team from the 1940s and 1950s, which stars Tom Hanks, Geena Davis and Madonna, follows on June 5.

“It is time to start planning on bringing Prescott Valley back to the way we were financially, economically and socially,” Prescott Valley Mayor Kell Palguta stated in a Facebook post. “We encourage those attending to consider getting a takeout dinner to help support our local restaurants.”

Both movies will be screened on the north end of the parking lot’s dirt area, and drivers will be asked to face the front of their vehicles toward the screen.

“We will not be spacing out the cars,” Palguta said in a phone interview last week. “… You are not required to go to this. It is no different than walking in Walmart.”

Sound for the movies will be broadcast on an FM radio station. Bathrooms with sanitation stations will be available as well. There likely will not be any concessions, so you are encouraged to bring your own snacks.

“You can remain in your car the entire time and have no social/physical contact with another person should you choose,” Palguta added.

Palguta said he developed the idea for the drive-in movies to generate some positive vibes in Prescott Valley.

“This is a sign that we as a community will get through this together,” he added.

“If you do not feel comfortable coming out to such an event, have COVID-19 or [have] been exposed, please stay home,” the mayor added. “… The only concern I have is not having enough room. This is the most popular [Facebook] post I’ve had ever. It was shared an unbelievable amount of times.”

For more information about the May 29 and June 5 events, call Prescott Valley’s Parks and Recreation Department at 928-759-3090.

Some of the information for this story was provided by Prescott Valley Communications Coordinator Heidi Dahms Foster.