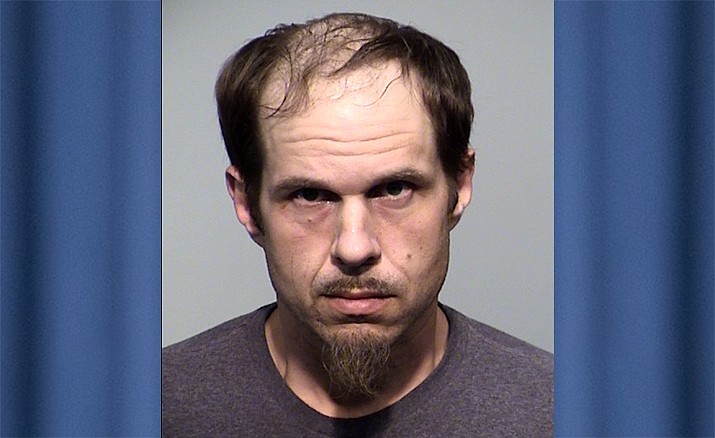 Brandon Vincent Duniec, 38, a registered sex offender and violent predator in the National Crime Information Index, was arrested May 2 after he allegedly attempted to solicit sex from three juveniles ages 11, 14 and 15. (PVPD/Courtesy)

Brandon Vincent Duniec, 38, a registered sex offender and violent predator in the National Crime Information Index, was arrested May 2 in Prescott Valley after he allegedly attempted to solicit sex from three juveniles ages 11, 14 and 15, according to Prescott Valley Police on Tuesday afternoon.

Duniec, from Phoenix, was arrested and charged with three felonies: luring minors for sexual exploitation, possession of dangerous drugs, and possession of drug paraphernalia.

The suspect was transported and booked into the Yavapai County jail in Camp Verde.

On Saturday, May 2, at approximately 7 p.m. a Prescott Valley Police officer was dispatched to the area of Lakeshore Drive and Navajo Drive concerning a red 1998 Toyota 4Runner, a four door pickup truck, in which the driver was acting suspiciously around two male juveniles on bicycles.

Upon stopping the vehicle, the officer discovered that the driver identified himself Duniec from Phoenix.

Officers contacting the juveniles on the bicycles learned that the driver was soliciting them for sexual activity. A third juvenile was identified in the area who gave the officers the same information.

“The public is encouraged to report anything suspicious whether in a vehicle or in a neighborhood. Had this information not been called into police dispatch, it’s unknown what could have happened,” Prescott Valley Police spokesperson Jerry Ferguson said in a statement. “See something, say something is a lifestyle of behavior.”