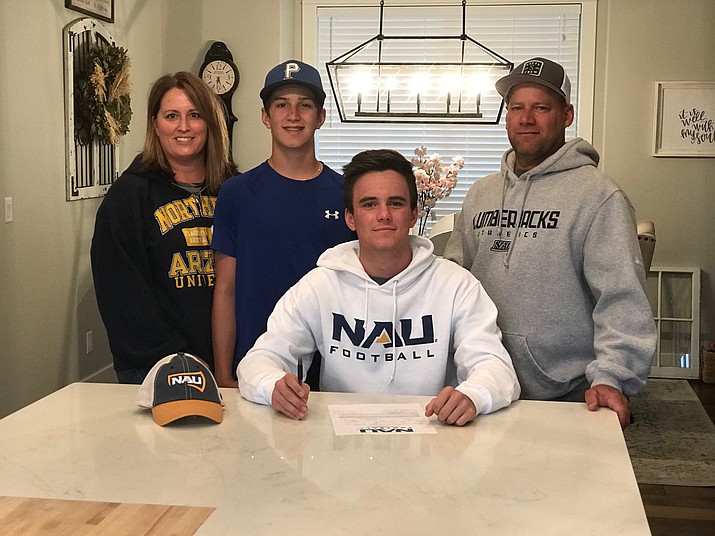 Prescott football’s Clay Gross and his family pose for a photo after he signed his letter of intent to continue his athletic career at Northern Arizona University (NAU) this fall. (Clay Gross/Courtesy)

Prescott’s Clay Gross has signed his letter of intent to continue his education and play football for nearby Northern Arizona University (NAU) in Flagstaff.

The senior kicker received an offer earlier in the year but decided to attend NAU because of its proximity to Prescott. Other schools Gross was in talks with included Arizona Christian, South Dakota School of Mines, University of Colorado and Texas State.

“It worked out really great with the location and I liked to be around the trees and stuff, just like Prescott. It almost seems like a slightly bigger Prescott so you get the college feel but then it’s not Tempe or Tucson,” Gross said.

“The football program was cool. I really like the special teams coach. He supported me coming and worked with me really well.”

Gross proved very valuable for the Badgers’ football team as he knocked in 47 PATs on 52 attempts during Prescott’s 7-4 season in 2019. The longest field goal he ever hit in a game was from 48 yards out, which was actually during his junior varsity season. During practice though, Gross said he’s starting to hit some from a little over 50 yards out.

Gross plans to study mechanical engineering at NAU since he said he’s always been a “big math and numbers guy” and has never really cared for English or history.

NAU struggled in 2019, compiling a 4-8 overall record and a 2-6 Big Sky Conference record. The Lumberjacks will seek their first winning season since 2017 where they went 7-5.