Ducey to let stay-at-home order expire May 15, green light given to gyms, pools and sporting events 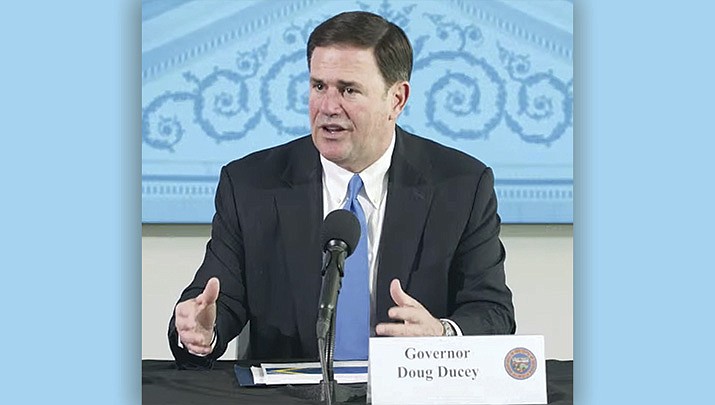 PHOENIX — Come midnight Friday night, Arizonans will no longer be living under a stay-at-home order.

Gov. Doug Ducey said Tuesday that the state has reached certain milestones which suggest a downward trend in COVID-19 outbreaks that makes him comfortable in allowing the order, issued in March, to self destruct.

Ducey also announced that pools, spas gyms and fitness centers both public and in hotels and apartments, will also be allowed to open immediately. And, beginning Saturday, major league teams are welcome to start playing their games here.

But for the moment, the stadiums and arenas will have only the players and staff. No spectators will be allowed, though Ducey said he believes the conditions of the pandemic in Arizona actually are safe enough here to permit people in the stands.

One key figure the governor is using to support his decisions is a decline in the percentage of tests for the virus coming back positive. At one point the rate was in the 10 percent range; the most recent figures are at 7.5 percent.

Only thing is, the initial tests performed for months in Arizona has been only of those who showed symptoms of COVID-19. That was done at least in part because of limited testing supplies.

In the past few weeks, however, state Health Director Cara Christ has allowed testing of all who thinks they may have been exposed. By definition, that increases the pool of those tested to include more who are less likely to have the virus.

Testing criteria aside, questions remain whether the decision Tuesday, May 12, by Gov. Doug Ducey to allow his directive to expire will have any effect.

On one hand, the existing order already allowed people to travel, including to go to any business that the governor has allowed to open. And that even now includes not only the grocery and department stores that always were exempt but also mom-and-pop shops, restaurants and beauty parlors.

Conversely, the governor acknowledged freedom to travel does not mean that Arizonans will be comfortable in returning to their pre-pandemic activities.

But Ducey, who mentioned more than once his desire to reopen the state’s stalled economy, made it clear that he believes Arizonans should be making their decisions based on all the work his administration has done to deal with the problem and not other factors — like news reports of about the pandemic.

“I wouldn’t address people to feel safe by what they see on the evening news,’’ he said.

“I would like them to feel safe by following the decisions that we’ve made over the course of time to protect public health, to ramp up what was necessary to disperse these large groups, the information that we have that shows the slow of the spread of this disease, and how we, as a state, working together, on each problem in its turn, have solved it,’’ Ducey continued.

But actually getting people out, back to work and spending their money, he said, is out of his control.

“What an Arizonan decides to do is up to them,’’ the governor said. “I just want them to have the responsible and accurate information in which to make that decision.’’

That still leaves the question of what happens if more people mingling in public results in an uptick in infection. Ducey said the state is more prepared than it was two months ago.

“We know much more,’’ he continued. “We know where the vulnerable populations are.’’

That category includes those who are 65 and older and with underlying health conditions. Ducey said that’s why there will be more testing of both residents as well as staff at nursing homes and other assisted-living facilities.

And the governor said he is not ready to lift his prohibition against outside visitors to residents living there.

Along the same lines, Ducey had some advice for the most vulnerable.

“The best practice they can have is to stay at home,’’ he said. “They should avoid returning to work where distancing is not practical and every precaution should be taken.’’

He also praised the Arizona residents who have practiced physical distancing.

“Please continue it,’’ he said.

Separately, Ducey acknowledged reports that about 160,000 Arizonans did not get the full amount they are owed in unemployment benefits. But he said there are obvious reasons for that.

“There has been a complete crush on the system,’’ the governor said, with more than 500,000 people seeking first-time benefits since the beginning of the pandemic and since he issued his stay-at-home order and restricted what kinds of businesses could remain open. “The system has been overwhelmed.’’

But Ducey said that everyone who is owed money will get it — eventually.

(Editor's Note: Our original story also listed bars as able to reopen. We have removed this from our report pending clarification from the governor's office.)