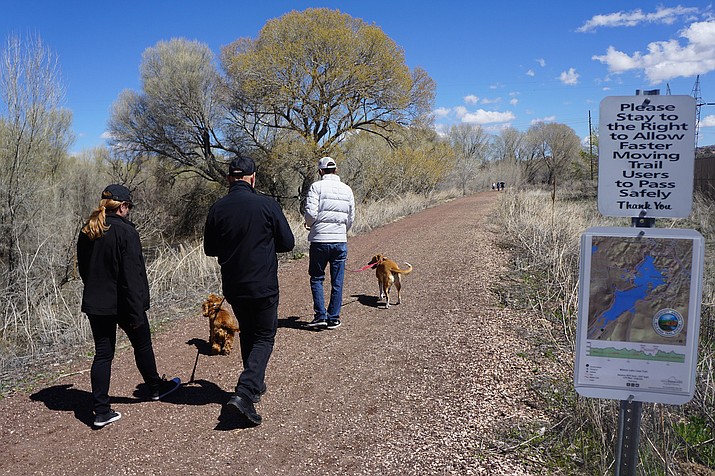 Usage at City of Prescott trails, parks and lakes has skyrocketed ever since the city announced that its recreational facilities would largely remain open during the coronavirus (COVID-19) pandemic. Soon after the start of the shut-down in late March 2020, a family walks along the popular Peavine Trail. (Cindy Barks/Courier file)

As the COVID-19 pandemic has continued, record numbers of people have been taking refuge at the City of Prescott’s lakes and trails.

In fact, Recreation Services Director Joe Baynes said visitation at Prescott’s three lakes has been reaching, and possibly exceeding, levels usually seen during popular summer weekends such as the Fourth of July.

Car counters at Goldwater, Watson and Willow lakes indicate that last week’s visitation reached the 11,600 level. That is 60% to 70% higher than a typical late April/early May week, Baynes said.

In the midst of the skyrocketing numbers, the city will be re-opening its park restrooms and playgrounds, effective Tuesday, May 12 — with continued encouragement to maintain social distancing.

The rise in park visitation began soon after the city’s announcement in March that it planned to keep its parks, trails and lakes open during the pandemic, and that parking fees would be waived.

The lakes’ visitation numbers have grown consistently since then — from the high-5,000s range in late March to the high 7,000’s by mid-April.

Baynes said the current numbers are comparable to July 4 visitation — “maybe even higher.”

Along with the rising numbers at the lakes, city trails have also been flooded with users. City Trails and Natural Parklands Coordinator Chris Hosking reported that use on the Watson Lake-area Peavine Trail is up by nearly 100% — from about 5,500 per month in a typical April to 10,400 in April 2020.

Willow Lake Trails are seeing an even greater increase — from 6,600 in a typical April to 15,100 in April 2020. The Watson Lake Loop Trails and the Constellation Trails are also showing significant increases.

Mayor Greg Mengarelli said he sees the outdoor activity as a positive thing, although the large numbers can be difficult for the city to handle.

“It’s good that people are getting outside,” Mengarelli said, adding that situation may continue for a time, but likely would be alleviated with the eventual re-opening of other activities such as gyms and theaters.

Although lakes, parks, and trails remained open throughout the COVID pandemic, the city closed down its park restrooms and playgrounds to guard against the spread of the virus.

Next week, in the wake of Gov. Doug Ducey’s updated executive orders, the city will re-open a number of facilities, including its playgrounds and public restrooms. In addition, drinking fountains will be turned on, according to a Thursday, May 7 news release from the city.

Parking fees will also be reinstated on May 12. The daily fee is $3 per vehicle, and Wednesdays remain free. Annual passes are available for $100, and are available by calling 928-777-1121.

“The general public is encouraged to practice social distancing and good hygiene,” states the new release, adding that gatherings of 10 people or more are strongly discouraged.