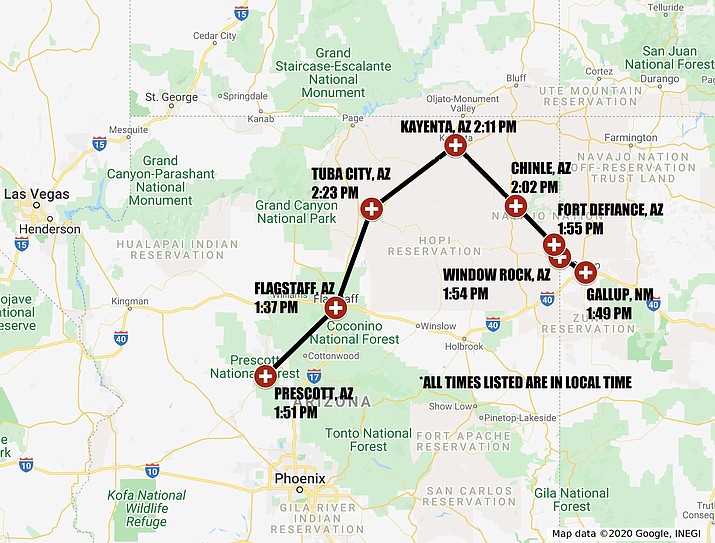 By The Daily Courier | DailyCourier | TheDailyCourier
Originally Published: May 6, 2020 4:22 p.m.

(Editor's Note: This post and map have been updated to show local flyover times for those communities that practice daylight saving time.)

Four aircraft from the Arizona Air National Guard will conduct a flyover mission Thursday, May 7, over the Navajo Nation and other Northern Arizona communities - including Prescott - to show appreciation to those serving on the frontlines in the battle against COVID-19.

“We support the community during COVID-19 by showing goodwill, and our hope is to work together to respond and grow from this event,” said U.S. Air Force Maj. Gen. Howard Purcell, Arizona National Guard Air Component commander.

“We want to show our support and we stand behind our community. We will move forward together,” he said.

The formation will launch from Tucson at approximately 11 a.m. to form up and head north and conduct an air refueling mission.

The first tribute will be over the following hospitals:

The tribute portion of the flight will last approximately one hour. Gallup, New Mexico, is one hour ahead of Arizona time, and will start around 1:40 p.m.

“This is a real world air refueling mission,” said U.S. Air Force Lt. Col. Trey Shewbert, 161st ARW Director of Staff. “This is a joint mission that readies our wings to fight and win our nation’s wars. These are Citizen Airmen from our state recognizing and providing hope to our friends, families and neighbors.”

Information provided by the Arizona Department of Emergency and Military Affairs and Arizona National Guard.