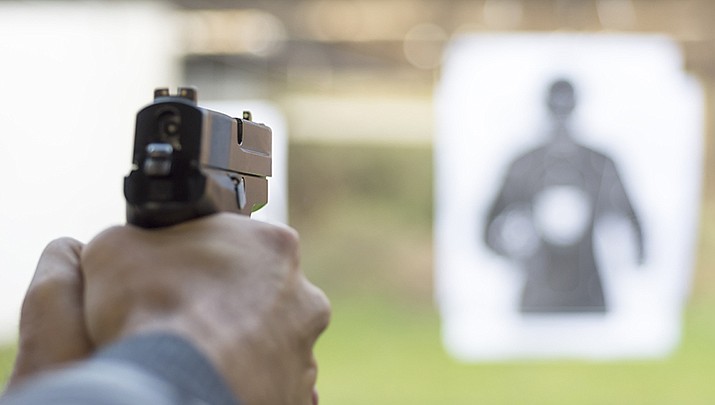 From 5 p.m. May 6 until July 31, or until rescinded, recreational shooting is prohibited in the Coronado, Prescott, and Tonto National Forests due to current conditions. (Courier stock art)

Starting on Wednesday, May 6, the Prescott National Forest will be among several national forests in Arizona that will be under a recreational shooting restriction to reduce wildfires.

“Within the last two weeks alone, these forests have experienced seven wildland fires likely caused by recreational shooting, resulting in hundreds of acres burned,” states the release. Factoring in the ongoing COVID-19 pandemic, the release adds, “The assembly of wildland firefighters engaging in suppression efforts becomes a public health concern. Under this restriction, discharging of a firearm, air rifle, or gas gun, except while engaged in a lawful hunt, is prohibited on the listed national forests.”

The restriction also attempts to reduce smoke emissions that compromise first responder and public respiratory health, Kohrman said. As a reminder, the release adds that tracer and incendiary rounds are prohibited on National Forest System Lands. In addition, exploding targets and fireworks are prohibited on all National Forests and Grasslands located in the Southwestern Region per Order #03-00-00-19-001 dated June 30, 2019.

The May 6 shooting restriction order prohibits “discharging of a firearm, air rifle, or gas gun, except while engaged in a lawful hunt.”

Violating the shooting restriction may result in an appearance in federal court, fines, or other penalties.

Forest visitors will still be able to engage in lawful hunting activities. While the shooting restrictions are in place, most of the Coronado, Prescott, and Tonto National Forests are still open for dispersed recreation activities to include hunting, camping and hiking.