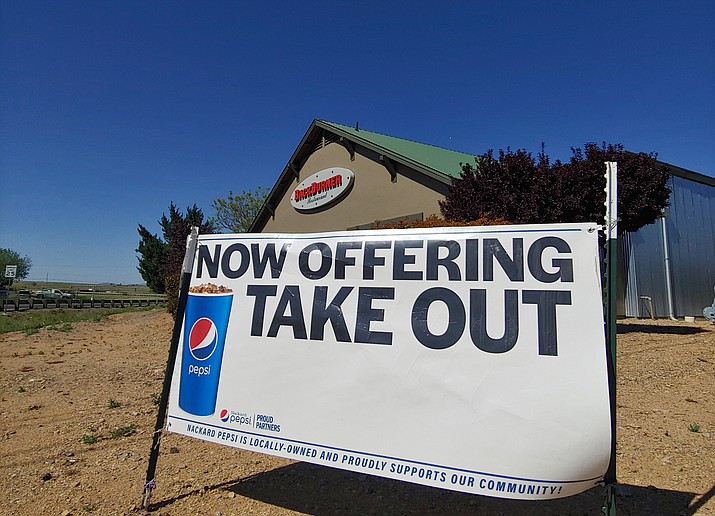 The BackBurner Restaurant, 8400 E. Long Mesa Drive in Prescott Valley, remains open for takeout during the COVID-19 pandemic. Staffers have been adjusting to the new normal, although it appears that Gov. Doug Ducey is preparing to let restaurants open later this month under some guidelines. (Doug Cook/Courier)

Will quad-city residents be allowed to dine out at their favorite restaurants by mid-May, when Gov. Doug Ducey’s extended stay-at-home order for the COVID-19 pandemic might end?

Although the governor has not outlined a specific plan for reopening restaurants, he said on Monday afternoon that he wants to reopen restaurants with a limited capacity on May 11. He has added that when they do, their employees will most likely have to wear masks and, when appropriate, gloves.

Establishments may need to follow stricter cleanliness guidelines, too, both at tables and with their menus.

For example, Roxane Nielsen, who co-owns Prescott Brewing Co. at 130 W. Gurley St. Suite A, with her husband, John, said their restaurant and pub took apart its kitchen when the coronavirus hit. The kitchen floor was resurfaced with epoxy, which lasted 2 weeks and resulted in all of its equipment being moved temporarily.

Growler refills for beer restarted this past week. On May 2, Prescott Brewing Co. sold pulled-pork sandwiches with barbecue sauce, brisket from its smoker, and cole slaw and beans on the side.

For takeout orders, Prescott Brewing Co. keeps one entrance at the atrium gate on Gurley St. and one exit by the parking lot out back to keep customers away from each other. Customers filter in and out, one or two at a time. 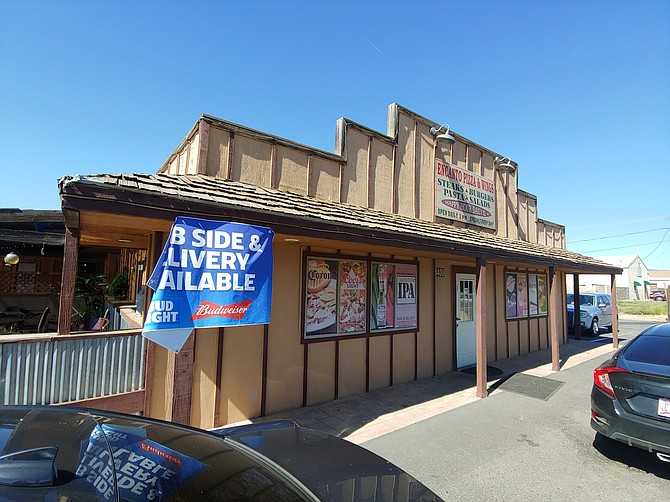 Encanto Italian Grill, located next door to the BackBurner on East Long Mesa Drive in Prescott Valley, has a sign indicating that it has stayed open for takeout during the pandemic. (Doug Cook/Courier)

Prescott Brewing Co. has also developed a system for sanitization, especially in the kitchen, Roxane said. When the restaurant reopens, employees will sanitize handles and have push plates on the doors.

Roxane added that her restaurant doesn’t use rags. A supply company supplies clean linens once a week. Prescott Brewing Co. disinfects the restaurant every day before it opens and after it closes.

When customers are allowed back into the dining room, Prescott Brewing Co. will have fewer tables so patrons are spaced farther apart, a practice it had already done before the shutdown. Atrium seating will be available in the upstairs dining room.

“This will automatically reduce our capacity by 60 seats,” she said, adding that the previous capacity was 200.

Prescott Brewing Co. will release a new, condensed menu before it reopens, too, similar to the newsprint menu it has had for years. Menus will be on the table or distributed at the door.

Kevin Calia, co-owner of the BackBurner Family Restaurant, 8400 E. Long Mesa Drive in Prescott Valley, said he has stayed open for carryout during the pandemic, thanks in part to the feds’ Paycheck Protection Program (PPP).

The National Restaurant Association is currently pushing for its members to adhere to social-distancing guidelines and to use masks and gloves. For years in the BackBurner kitchen, Calia said his staff has worn gloves.

The biggest change, however, may be removing everything from the tables – no silverware (until customers arrive), no salt and pepper shakers, no ketchup and mustard bottles, and no creamers. BackBurner also plans to install sanitation stations for washing and cleaning hands.

Brad Duryea, co-owner of the Blue Hills Café, 12262 E. Bradshaw Mountain Road near Dewey, said he will follow Gov. Ducey’s guidelines for restaurants after he releases them to the public.

Blue Hills Café’s business is down some 60% during the pandemic, Duryea added, as he has only carryout available.

“I’m not happy with that, but I’m thankful for the business we have had,” he said. If the café can operate only at 50% capacity, Duryea added that will be difficult on business, too.

“We’ve thought about having a designated person running the food and more precautionary measures,” he added.

AN ISSUE WITH MASKS

If the state requires restaurant employees to wear masks, Roxane said she wouldn’t know where to buy them.

“None of our suppliers do that,” she added.

Calia, who has a medical background, said he wants BackBurner to “look as normal as possible” and maintain social distancing with handwashing and gloves, as opposed to masks.

“We have masks if anyone wants to wear them,” he added.

Eight people work in management for Prescott Brewing Co., and they’ve been working five to six days a week during the pandemic.

The restaurant’s servers, bussers, and cooks are being paid through the PPP. Despite the governor’s extension of the stay-at-home order to May 15, Roxane said she’s “looking toward the end of May” to reopen.