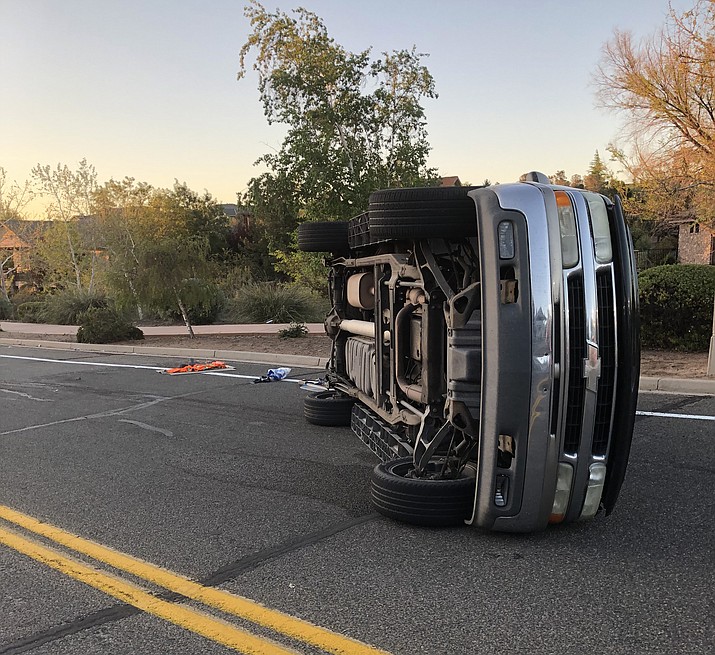 A single-vehicle rollover crash early Saturday morning, May 2, has resulted in the death of the driver - a 16-year-old girl, Prescott Police reported.

Just before 5 a.m. Saturday, the Prescott Police and Prescott Fire departments responded to a report of a single-vehicle rollover crash on Smoketree Lane at Golden Bear Drive. Upon arrival officers located a silver Chevrolet SUV that had rolled onto the driver's side of the vehicle and came to rest in the middle of a lane of traffic, a news release stated.

The vehicle had been occupied by four juveniles of which three were able to get out of the vehicle without assistance; however, the fourth was trapped in the driver’s seat area and had to be extricated from the vehicle by the Fire Department. The driver suffered significant injuries and was airlifted from the scene by Native Air to a trauma center in the Phoenix area, police stated. The other three juveniles were not injured or had very minor injuries from the crash.

"Officers from our Patrol Bureau, Traffic Safety Section and detectives conducted a thorough investigation of the scene and interviewed three of the occupants, all Prescott residents, of the vehicle who reported that they had all been hanging out with each other and were in a rush to get home because they were all late," according to the news release.

At just after 7 a.m. police were notified that tragically the 16-year-old driver was pronounced deceased at the hospital from her injuries. "The driver’s family had been notified at our request by the Yavapai County Sheriff’s Office and was en route to the hospital when we were notified of her death," police reported.

The cause of the crash is still under investigation but it is believed that speed played a significant factor in this incident. It does not appear that alcohol was a factor and all four occupants were not wearing their seatbelts at the time of the crash, police said.

The roadway was closed for almost eight hours while officers were investigating the scene, but was reopened at around 1230 p.m. Saturday.

"Our thoughts go out to the family of this young lady at a time when there is so much going on," police stated, "the tragedy of losing such a young life is devastating to her family, our first responders, nurses and doctors and our community."