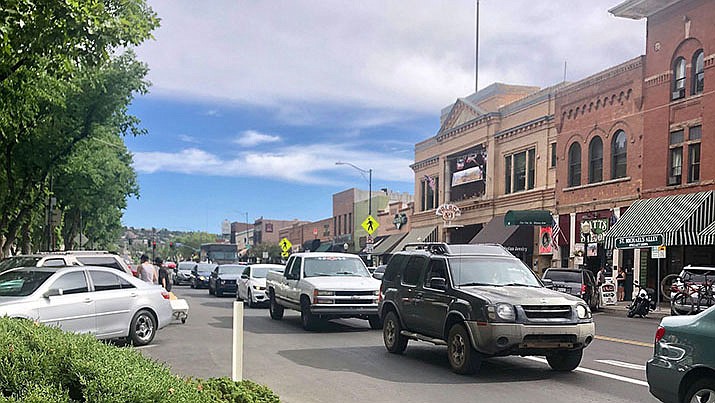 In this file image, traffic is seen in downtown Prescott. (Courier, file)

Prescott Community Outreach Manager John Heiney said late Monday, March 30 that the city will maintain the precautions it had already put into effect for social distancing, but that there were no immediate plans to shut down city parks, trails, or restaurants’ curbside and delivery service.

“We certainly were expecting something like this at some point,” Heiney said Monday afternoon of Ducey’s March 30 “Stay home, stay healthy, stay connected” executive order.

Although city officials were still absorbing the information from the order late Monday, Heiney said the list of essential activities that were released earlier offered guidelines on what would be allowed.

Among the essential activities listed in Ducey’s order are: “outdoor exercise activities, such as walking, hiking, running, biking or golfing, but only if appropriate physical distancing practices are used.”

Based on that, Heiney said the city would continue to keep its parks and trails open, as it has over the past week or so. Signs at city parks and trailheads caution about the need for social distancing.

Although the city does not have usage numbers at all of its parks and trailheads, Baynes said car counters at its three lakes — Watson, Willow, and Goldwater — showed that 5,000 cars had visited the lakes from last Monday through Sunday. “That is more than normal,” Baynes said.

Along with leaving its parks open, Heiney said the city plans to maintain its curbside service at the Prescott Public Library. Starting last week, library employees have been distributing books that have been placed on hold to patrons’ cars.

“As of today, we plan to keep it open,” Heiney said of the library service. He noted that the city had received positive feedback about the curbside service.

Likewise, restaurants that have been offering curbside, delivery, and drive-in service would be allowed to continue.

Based on the governor’s order, Heiney said non-essential services such as retail stores that do not sell groceries would no longer be allowed to provide face-to-face service to customers.

The governor’s order states: “Non-essential businesses may continue to operate those activities that do not require in-person, on-site transactions and are encouraged to maintain at least minimum basic operations that maintain the value of the business’ inventory, preserve the condition of the business’ physical plant and equipment, ensure security, process payroll and employee benefits, facilitate employees of the business being able to continue to work remotely from their residences, and related functions to include mail pickup.”

Heiney said city officials learned about the order during a 2 p.m., March 30, call with the governor’s office.

City of Prescott intensifies message on social distancing for use of parks and trails
Texas, Ohio among many states to take steps toward reopening
Prescott reopening many city facilities on May 11
Prescott Valley keeping COVID-19 precautions it put in place
Prescott community leaders address coronavirus
Event Calendar