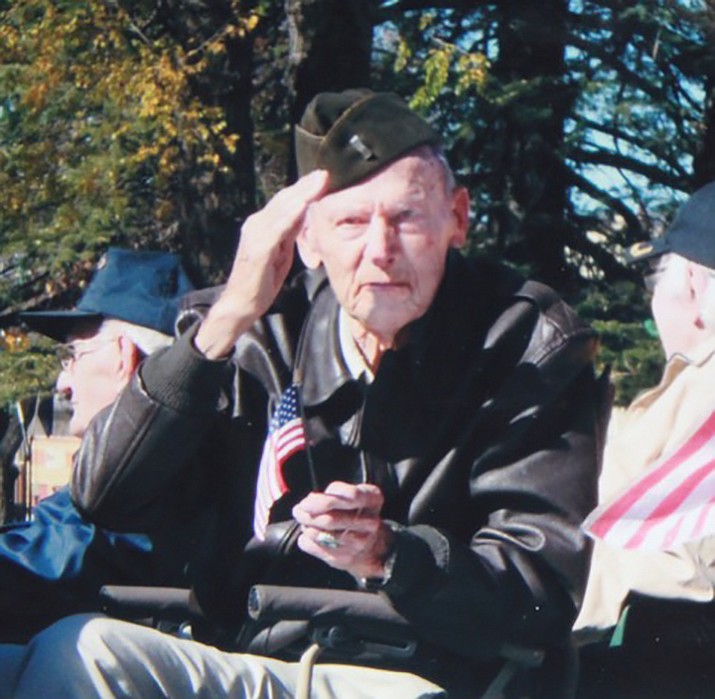 Ben had graduated high school and was working when the United States entered WWII. He enlisted early in ’42 and proudly served in the Army Air Corp for the duration of the War. He became a lead bombardier and flew 40 missions over the southwest Pacific.

A few months before being shipped out, he attended a USO dance in Los Angeles, and there met Margaret Wolff, a Prescott, Arizona girl whom he married in Tonopah, Nevada. after a whirlwind courtship. When the war ended he and Margaret returned to Kansas where they raised their three girls.

He had a long and successful career in construction, retiring to Prescott, Margaret’s beloved hometown in 1993. Ben was active in many ways. He was a great golfer, bowler, pool player, dancer and lover of classical music. Best of all was his sense of humor and upbeat personality. Following Margaret’s death, he became active in and was president of the local singles’ club. During that time he met a lovely woman, Elizabeth Hoffman, with whom he shared a loving and enduring relationship. One of their shared interests was the military. Ben embodied that old WWII “guy,” participating in parades, picnics, and sharing stories with veterans of all ages.

He re-established his membership with the 307th Bomb Group (H) and attended their reunions, becoming a valued member. He often spoke to servicemen, played taps, and related stories of the great Era.

Survivors include his three daughters, Cathy (Heath) Krieger, Susan (Steve) Simmons, Leslie Waldo (Rick Hamman), 9 grandkids and 9 great-grandkids, as well as his dearest friend Elizabeth Hoffman. If you want to be loved, be lovable – he was.

Kindred Hospice staff was exceptional. And a special thanks to Brookdale staff who cared for him so long and so lovingly. Arrangements are entrusted to Ruffner-Wakelin Funeral Homes and Crematory. Due to the current pandemic, no memorial will be held. A military honors ceremony will be held with inurnment at the VA Cemetery in Prescott at a later date. A family and friends picnic will be held whenever possible. Please visit www.ruffnerwakelin.com to sign the guestbook and share a memory on their online guestbook. For questions, contact them at 928-445-2221.