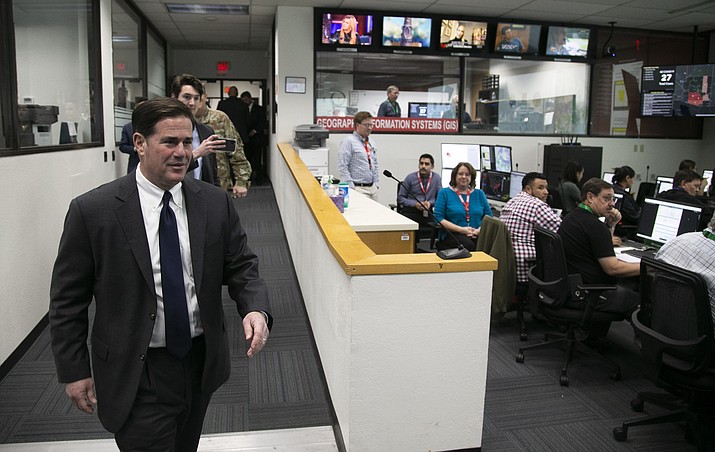 Gov. Doug Ducey walks into the State of Arizona Department of Emergency and Military Affairs operations center as members of DEMA work while responding to the coronavirus pandemic, in the DEMA operations center at the Arizona National Guard Papago Park Military Reservation in Phoenix, Wednesday, March 18, 2020. (David Wallace/The Arizona Republic via AP, Pool)

PHOENIX — Arizona children won’t be going back to school before April 13.

In a new directive, Gov. Doug Ducey and Kathy Hoffman, the state schools chief, have decided to extend by two more weeks the closure announcement they made just this past Sunday. The pair said they believe the extension is necessary to be sure that conditions are safe for students to return.

This is not unexpected news to greater Prescott-area superintendents.

“I think it’s probably a good decision to give us another two weeks so we can monitor the virus,” Humboldt Unified School District Superintendent Dan Streeter said. “I think the desire for everybody is that we will be in a situation that is safe for our staff and students to return to school before the end of the school year. I think that’s the hope everybody has.”

Both Streeter and Prescott Unified School District Superintendent Joe Howard said their administrators and staff are working around the clock to ensure their students get appropriate instruction despite the less-than-ideal circumstances posed by this unprecedented public health concern.

“We want to come back as soon as we safely can,” Howard said, adding that he appreciates the efforts of all the state leaders to keep everybody safe and also allow for “distance learning” that enables staff and students to stay at home.

Streeter and Howard agree that they appreciate the consideration Ducey and fellow state lawmakers are giving to bending academic and employment compensation rules appropriate for these unforeseen events.

“They’re doing a great job with this,” Howard commended. “Maybe it’s the start of something new.”

Gubernatorial press aide Patrick Ptak said that since the original two-week closure was announced, the Centers for Disease Control and Prevention has come out with new protocols to protect health. He said following these protocols would preclude schools from reopening as scheduled on March 30.

“Staffing would be very challenging at this time,’’ she said. And then there’s the possibility that teachers could spread the virus among themselves in meetings.

Whether schools will reopen before the end of the school year remains an open question.

“Our goal is to get kids in the classroom as soon as possible,’’ Ptak said. “We believe that’s the best place for them. We’re going to continue to reassess the situation in order to safely do that.’’

Hoffman said she also intends to “keep monitoring and evaluating the situation.’’

But she told Capitol Media Services that it would not be the end of the world if schools did not reopen before the summer break.

She pointed out that this is the beginning of testing season.

“This is the time of the year when there would be a lot of reviewing and strengthening those foundational skills to get ready for the state tests,’’ Hoffman said.

“And during the testing window there typically is not any instruction,’’ she continued. “So if I had to choose for a quarter for this to happen this is honestly the best quarter because the majority of the instruction has already been completed.’’

That doesn’t mean there will be no learning involved if schools remain shuttered.

Legislation approved unanimously Thursday by the House and Senate sets up procedures for school districts to provide educational opportunities for students through the end of the semester. Options include online instruction, sending home assignments and even having staffers read with younger students over the phone.

Ptak said the governor is looking forward to signing the measure.

Hoffman, however, said she’s not optimistic that this plan is going to make up for the lack of actual classroom instruction.

“To be completely honest, I know that kids are not going to learn in the same way and learn as much as they would if they were in our classrooms with our teachers,’’ she said. And Hoffman said the fact remains that not everyone is going to have access to interactive online instruction.

“We know across the state that there are families that don’t have computers or don’t have internet,’’ she said. “There’s going to be significant challenges in trying to provide equal opportunity for kids to access learning.

And that doesn’t even consider students with disabilities and other special needs.

“How are they going to learn?’’ Hoffman asked. “These are going to be immense challenges.’’

Ptak acknowledged that the decision to delay reopening schools for two more weeks comes more than a week before classes were slated to resume. But he said the governor believes it’s important to get scheduling information into the hands of parents as soon as possible to allow them to plan.

“What we have been prioritizing in recent weeks is, first and foremost, making sure that kids are fed,’’ she said. “Having access to food is important.’’

Hoffman said she also wants to be sure that school staffers will continue to be paid.

That problem appears to be taken care of with the new legislation awaiting Ducey’s signature. It provides continued state aid to schools to keep paying staff -- both instructional and support -- as long as schools continue educational programs in whatever alternative format they can.

Still, there are other issues.

One is that extended closure -- or scrapping the rest of the semester -- leaves no opportunity for testing students to see what they’ve learned for the year.

Those standardized tests also are important to schools, as they are graded on their performance and improvement. And there also are financial benefits in the form of additional state aid.

“Everything has to be figured out in a different way,’’ Hoffman said. “So we’re just taking it day by day.’’

Hoffman said her department is working to help educators be “as creative as possible’’ in finding ways to continue providing instruction given the unique situation created by the pandemic.

“But there’s no way we could achieve what we could in a typical school year,’’ she said.