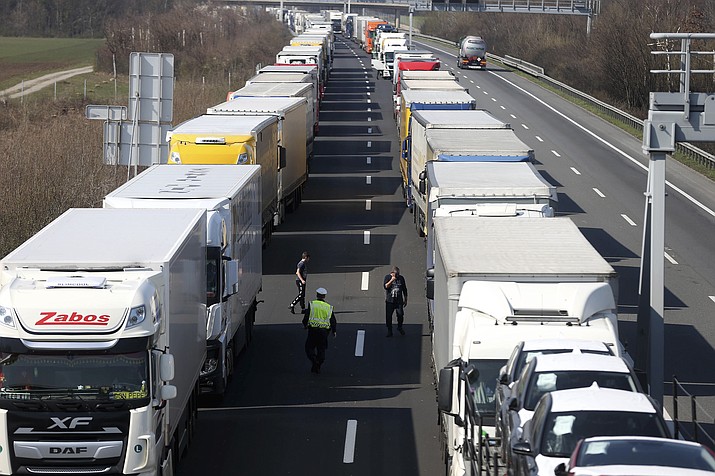 Trucks stand on the highway close to the border between Austria and Hungary near Bruck an der Leitha, Austria, Wednesday, March 18, 2020. Hungary has closed the border due to the new coronavirus outbreak. Only for most people, the new coronavirus causes only mild or moderate symptoms, such as fever and cough. For some, especially older adults and people with existing health problems, it can cause more severe illness, including pneumonia. (Ronald Zak/AP)

BERLIN — Desperate travelers choked European border crossings Wednesday after countries across the Continent began shutting the doors against the coronavirus, which has now infected more than 200,000 people worldwide and killed over 8,000.

In the U.S., President Donald Trump pressed Congress to swiftly pass a potentially $1 trillion rescue package to prop up the economy and speed relief checks to Americans in a matter of weeks, as stocks tumbled again on Wall Street.

The border closings extended to North America, as the U.S. and Canada agreed to close their shared boundary to nonessential travel. And the Trump administration was said to be considering a plan to turn back all people who cross into the United States illegally from Mexico.

Some bright spots emerged: Wuhan, the central Chinese city where the virus was first detected in late December and which has been under lockdown for weeks, reported just one new case for a second straight day Wednesday. 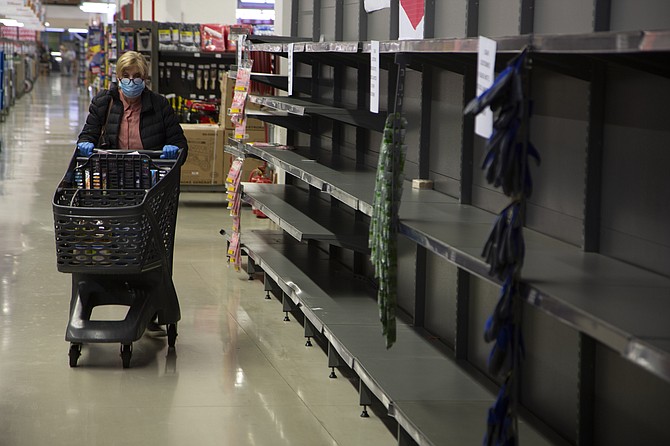 A masked customer passes empty shelves stocking toilet paper in a Johannesburg supermarket Wednesday March 18, 2020, amid panic-buying due to the coronavirus outbreak. For most people the virus causes only mild or moderate symptons . For others is can cause more severe illness, especially in older adults and people with existing health problems. (Denis Farrell/AP)

But in a grim illustration of the epidemic's shifting center of gravity, the death toll in Italy moved closer to overtaking China's. Italy had more than 2,500 dead and was averaging about 350 a day; China's toll was just over 3,200.

Meanwhile, the United Nations' International Labor Organization estimated that the crisis could cause nearly 25 million job losses and drain up to $3.4 trillion in income by year's end, but that a coordinated global response in the form of fiscal stimulus and other measures could help reduce the toll.

In releasing the new global infection figures, Johns Hopkins University said more than 82,000 people have recovered from the virus, which causes only mild or moderate symptoms such as fever and cough in most cases, though severe illness is more likely in the elderly and those with existing health problems.

Still, scientists have no doubt the true number of people infected is higher than the 200,000 reported by health authorities because of the possibility that many mild cases have gone unrecognized or unreported, and because of the lag in large-scale testing in the U.S., where the effort has been marked by bumbling and bureaucratic delay.

The U.S. reported more than 6,500 cases and at least 107 deaths, half of them in Washington state, where dozens of residents from a suburban Seattle nursing home have died.

Across the Continent, European leaders closed borders to nonessential traffic, while leaving many frontiers open to cross-border workers and trucks carrying critical goods like food and medicine. That led to monumental traffic jams.

To alleviate some of the pressure from Eastern Europeans stuck in Austria and trying to return home, Hungary opened its borders in phases. Bulgarian citizens were first allowed to cross in carefully controlled convoys, then Romanians had a turn. Serbians were also allowed to pass through.

But at one point early on the Austrian side, trucks were backed up for 28 kilometers (17 miles) and cars for 14 kilometers (nearly 9 miles).

Thousands of trucks were backed up in Lithuania on roads into Poland. Traffic was similarly jammed along Germany's border with Poland.

The European Union said that it was trying to help about 80,000 citizens stuck outside Europe get home, but that it faced huge challenges, including finding flights.

Serbian President Aleksandar Vucic expressed outrage as his citizens returned, claiming that 40,000 coming from jobs abroad had largely ignored orders to go into isolation at home, putting others in the country at risk.

Italy has been the second-hardest hit country with more than 31,000 cases, behind more than 81,000 in China. But Lothar Wieler, head of the Germany's disease control institute, warned that unless social contacts are reduced, his country could have 10 million infected people in two to three months.

In Southeast Asia, the causeway between Malaysia and the financial hub of Singapore was eerily quiet after Malaysia shut its borders, while the Philippines backed down on an order giving foreigners 72 hours to leave from a large part of its main island.

Taiwan said that it, too, would ban foreigners from entry and citizens would have to quarantine at home for 14 days.

Even tourists on Ecuador's Galapagos islands — 1,000 kilometers (620 miles) off the South American mainland — have been affected. Canadian Jessy Lamontaine and her family were stuck there when flights were suspended.

“I was in tears this morning,” Lamontaine said. “I couldn’t get any answers from the airline. I had no money and didn’t know whether I was going to keep my job.”

In the U.S., the coronavirus is present in all 50 states after West Virginia reported an infection. In far-flung Hawaii, the governor encouraged travelers to postpone their island vacations, while Nevada ordered its casinos closed.

New York City Mayor Bill de Blasio warned that residents should be prepared for the possibility of a shelter-in-place order within days — a near-lockdown like the one covering almost 7 million people in the San Francisco Bay area. In the most sweeping measure of its kind in the U.S., they are allowed to leave their homes only for food, medicine or exercise.