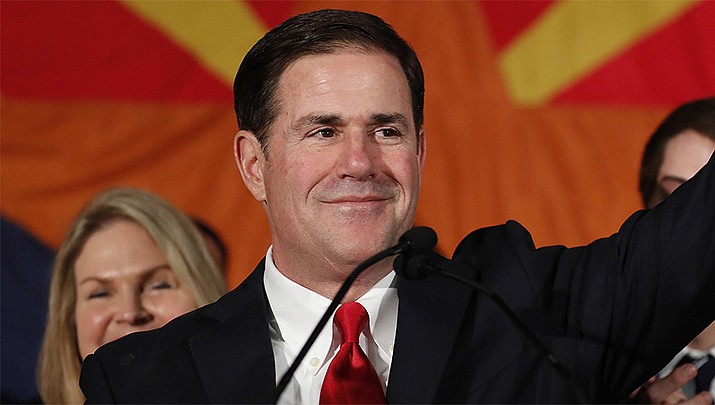 Gov. Doug Ducey is defending his decision not to order the closure of bars and restaurants as has already occurred in the state's two largest cities and Flagstaff. (Courier, file)

PHOENIX -- Gov. Doug Ducey is defending his decision not to order the closure of bars and restaurants as has already occurred in the state's two largest cities and Flagstaff.

The governor pointed out that there has been no such recommendation, either from the U.S. Centers for Disease Control and Prevention or his own Department of Health Services. Instead, he said, they have simply recommended that there not be gatherings of more than 10 people.

It was that recommendation that the mayors of Tucson, Phoenix and Flagstaff used to shutter these kinds of businesses.

That, however, has not affected bars and restaurants elsewhere, including perhaps right outside each city's limits. And that creates a situation for patrons there to spread COVID-19 back to their home communities if someone there is infected.

"There will always be bad actors in any situation,'' Ducey said. But the governor said that is not a reason for him to extend the edict statewide.

"What we want to do is put out responsible guidance for the entire state of Arizona,'' he said. "We want to make decisions that protect public health first and foremost to account that we have a large state and things are different in Tombstone than they are in Tucson.''

The governor was careful not to lash out at the officials in cities that have chosen to force closures.

"But the decisions we make from the governor's office are statewide,'' Ducey continued. "And these are the responsible guidance and direction for our state at this time.''

And what of those people who still want to go out and party where it remains available?

"We're going to ask people to act responsibly,'' Ducey said. But he suggested there may be limits to that.

Anyway, the governor said, it's not necessary to close down all bars and restaurants to protect public health.

"You can go out in groups smaller than 10,'' he said. And Ducey said there are "responsible owners'' who can operate their establishments and still "avoid community spread.''

That argument was backed by state Health Director Cara Christ.

"There are things that eating establishments can do to 'socially distance' people who are in those areas,'' she said, like keeping every other table unoccupied.

The governor said he is not shy about using his powers should he believe the need arises.

"In this type of situation, in a crisis there is a real role for government,'' he said. And Ducey said he's aware that things are going to get worse.

But he said there are other issues for him to consider.

"Of course I've got concerns for our economy and the people that work inside our economy,'' Ducey said.

"I'm trying to make the most responsible, proactive, measured and balanced decisions,'' he continued. "But I will use every tool in the toolkit and exercise every power given to the governor when necessary.''