COVID-19 in Arizona update: What you need to know about the novel coronavirus 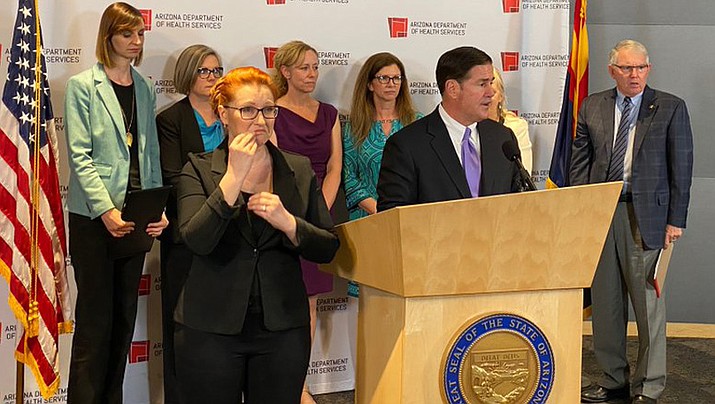 Gov. Doug Ducey says the state is working closely with federal health officials and will continue to update its public advisories as the Centers for Disease Control updates federal guidance. (Photo courtesy of Doug Ducey/Twitter)

COVID-19 around the world

More U.S. states and cities are battling the spread of COVID-19 with school closures, cancelations of public gatherings and businesses limiting services that require human contact.

As new cases of COVID-19 are being confirmed across the globe, here’s what you need to know about the fast-spreading respiratory virus that causes it.

As of March 18, Arizona health officials have confirmed 27 cases and 18 presumptive positive cases of COVID-19. Presumptive positive means tests in Arizona have determined the person has the highly contagious respiratory virus, but the diagnosis has yet to be confirmed by the Centers for Disease Control and Prevention. Results are pending on 102 others, Arizona officials report.

On Tuesday, Phoenix Mayor Kate Gallego declared a state of emergency for the city, resulting in the closures of bars and in-restaurant dining. Restaurants moved to takeout, and fast food places are drive-thru only. Similar declarations have been made in San Francisco and other major U.S. cities.

Gov. Doug Ducey and Superintendent of Public Instruction Kathy Hoffman have announced that Arizona schools will be closed through March 27.

Arizona’s first confirmed case of COVID-19 was diagnosed in January, shortly after a man in the Arizona State University community returned from Wuhan, China, where the novel coronavirus was first detected in late December. University officials say that man has recovered and been released from isolation.

To date, health officials say 265 people have been tested for COVID-19 in Arizona. Maricopa County has the most cases, 11, followed by Pinal County (9), Pima County (5), Navajo County (2) and Graham County (1). Because of medical privacy laws, authorities will only reveal ages and the county where the affected individuals reside.

On March 18, the CDC reported that the U.S. death toll rose to 97, with 7,038 cases confirmed in all 50 states and the District of Columbia, Puerto Rico, Guam and the U.S. Virgin Islands. President Donald Trump and Prime Minister Justin Trudeau are closing the U.S. Canada border to “nonessential traffic.”

On Wednesday, the Senate approved a $46 billion emergency funding request known as “phase two” of the legislation meant to blunt the effects of the pandemic and shore up the U.S. economy.

COVID-19, which has killed more than 6,600 around the world, can be difficult to detect and monitor. Symptoms in confirmed patients ranged from none to mild to severe, according to the Arizona Department of Health Services. Symptoms may appear two to 14 days after exposure to the illness, and can include:

The virus is thought to spread mainly from person-to-person, likely through direct contact with respiratory droplets from coughing or sneezing.

With most respiratory viruses, people are most contagious when they’re exhibiting symptoms. With COVID-19, there have been reports of spread before patients exhibited any symptoms.

There’s no vaccine to prevent COVID-19 or a cure for it, though some patients recover. Arizona health officials suggest the following actions to help prevent the spread of the illness: 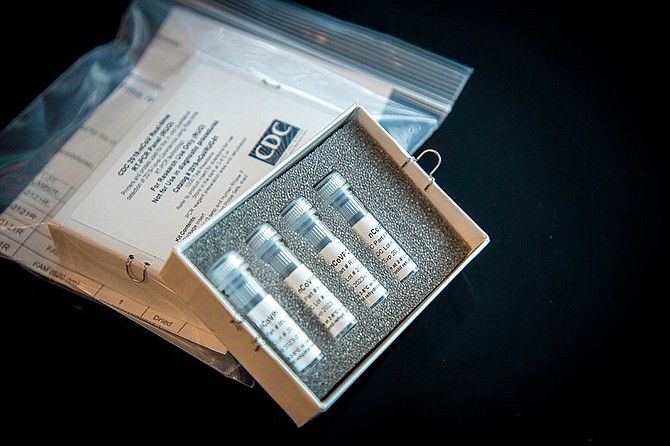 Travel is a major factor in deciding whether to get tested, state health officials said. Seek testing if you’ve had a fever and respiratory symptoms within two weeks of travel from China, or have had close contact with someone who has the symptoms and has traveled to China. Call your health care provider before your visit to alert them of your symptoms and exposures, according to the Arizona Department of Health Services.

The kit developed by the CDC tests for severe acute respiratory syndrome coronavirus (SARS-CoV-2), which is the virus that causes COVID-19. These tests can only be conducted in United States’ laboratories the CDC has designated as qualified.

Arizona began commercial testing Wednesday to produce faster results. The state has vowed to provide testing outcome updates daily, and national updates are expected from the CDC on Mondays, Wednesdays and Fridays.

On Tuesday, airport officials reported a drop the number of international flights that travel through the airport, with airport spokesperson Krishna Patel telling The Arizona Republic passenger traffic has dropped by 30% over this time last year.

In addition to regular 24-hour cleaning, the airport has increased the sanitation of “high-touch areas,” such as escalator railings, Roybal said. The Phoenix Aviation Department is in touch with health officials and will take action as directed.

The U.S. State Department has issued travel warnings to some destinations, including China and cruises to or within Asia.

For more updates on COVID-19 in Yavapai county, visit www.yavapai.us/chs