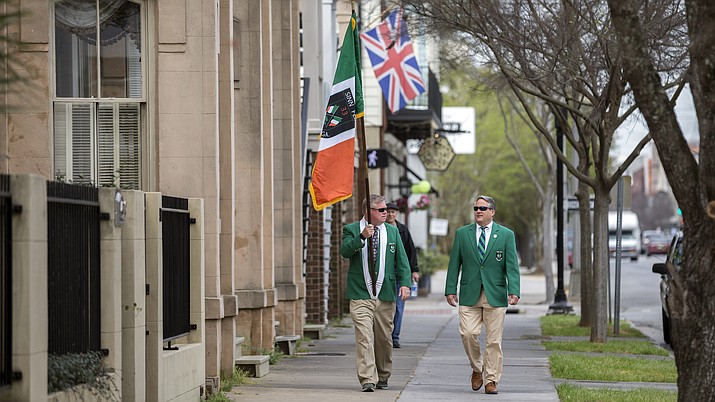 BOSTON — St. Patrick's Day revelers across the world tried to salvage the holiday with makeshift celebrations after parades and parties were scrapped and residents were urged to hunker down at home to slow the spread of the new coronavirus.

It was the first St. Patrick's Day in more than 250 years without a large parade in New York City, but a small group of organizers marched the rain-soaked streets early Tuesday anyway — observing "social distancing," they said — to keep the tradition alive.

Led by police cars with flashing lights, people in uniforms and sashes marched up Fifth Avenue before dawn with a banner and flags as bagpipe music played. The brief march wasn't advertised, and the sidewalks were largely empty.

In Savannah, Georgia, which canceled its hugely popular parade for the first time in 99 years, there were no bagpipers, no cheering crowds — just two men in green blazers carrying a large Irish flag as they trudged along largely abandoned sidewalks.

“It's really strange,” said Bill Bradley, carrying the flag on its long wooden pole. “It's almost like a dream, like living in some kind of nightmare.” Bradley and his friend John Lowenthal, members of one of Savannah's Irish social societies, opted to walk the parade route on their own.

There were virtually no signs of revelry in a Chicago, which scrapped the nearly 60-year-old tradition of dyeing the Chicago River green in order to keep crowds away.

One or more diehards tried to turn at least part of the river green anyway. A portion of the river was turned green by someone, but it's not clear what substance was used, WTTW-TV reported.

After having to postpone shows in Boston, American Celtic punk band The Dropkick Murphys hoped to spread Irish cheer to those holed up in their homes with a concert that will be livestreamed Tuesday night on YouTube, Instagram and Facebook.

“We’re gonna play it like there are people in front of us, at level 10,” singer and bassist Ken Casey of the band, known for its popular song “I'm Shipping Up To Boston," told WBUR.

In Minnesota, Gov. Tim Walz had ordered bars to close at 5 p.m. Tuesday and asked people to resist going out for one last blowout.

Dooley's Pub, near the Mayo Clinic in Rochester, urged residents on social media to “stop on in for some corned beef and cabbage!” and pledged to keep pouring green beer until 5 p.m. The bar said it wanted to "allow our employees a chance to earn as much as they can before the shutdown pushes them into an untenable economic situation.”

Neighbors in some communities organized “Shamrock Scavenger Hunts” on social media to give kids whose schools are shuttered something fun to do. Residents were told to hang a shamrock in their window so kids could go around the neighborhood and spot the shamrocks while keeping a safe distance from one another.

For most people, the coronavirus causes only mild or moderate symptoms, such as fever and cough. For some, especially older adults and people with existing health problems, it can cause more severe illness, including pneumonia, or death. The vast majority of people recover from the new virus.

Parades were canceled across the globe. Bars and restaurants that would typically be filled with partiers on St. Patrick's Day were closed to all but takeout and delivery in places like New York and Massachusetts.

Irish authorities called off Dublin’s parade, which usually draws half a million revelers, and pleaded with people not to congregate at house parties.

In the U.K., London’s festival in Trafalgar Square was called off, and the government urged Britons not to visit bars and restaurants but did not formally shut them down.

Still, landmarks around the world, including Sydney Opera House, the London Eye and The Colosseum in Rome, were lit up in green as part of Tourism Ireland’s “Global Greening” project.